General Charles 'Mercury Red' Barrowsmith is an EU general expected to appear in Generals 2.  He is of Scottish descent and appears to be part of Clan Gordon.

Leaked image with name and nationality 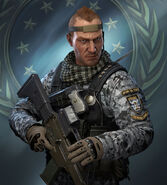 Wallpaper
Add an image to this gallery
Retrieved from "https://cnc.fandom.com/wiki/Charles_Barrowsmith?oldid=215517"
Community content is available under CC-BY-SA unless otherwise noted.