The Chemical warrior is a special close combat infantryman appearing in Renegade.

Members of the Black Hand[1] who underwent higher level weapons training and wear specialized biohazard suits that allow them to walk through Tiberium unharmed (although it is still very vulnerable to gunfire and shrapnel.

In Renegade, he's the only human character that's completely immune to Tiberium, but he is not as difficult to kill as his strategy game counterpart, and is particularly vulnerable to fire-based weaponry. He is also a very easy target for snipers. His large helmet also makes it easy to headshoot him with any weapon. When killed, his Tiberium supply explodes, damaging anyone around him. 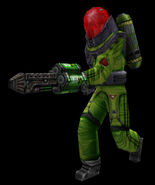 Early version of the sprayer carried by the final chemical warrior

A chem warrior engages Logan in the refinery. Note the old version of the Locust rocket launcher

Chem warrior with the early version of the chem sprayer, in a sniper rifle's crosshairs

Chemical warrior in Renegade database
Add an image to this gallery

The chemical warrior appears in both Renegade and Tiberian Dawn. In Kane's Wrath a similar unit appears, dubbed the Tiberium trooper.

Retrieved from "https://cnc.fandom.com/wiki/Chemical_warrior_(Renegade)?oldid=149977"
Community content is available under CC-BY-SA unless otherwise noted.