Collects up to $300 money worth of supplies.

Supply Trucks were the supply collectors for the Chinese army.

Moving back and forth from supply docks or piles to the nearest Supply Center, Supply Trucks could collect a large quantity of supplies per run (up to $300/per run). Supply Trucks are cheap and can be quickly assembled in a Chinese supply Center. However, they are unarmed and lightly armored to keep costs down and to meet the minimum standard for having civilians as drivers. Also, unlike other supply collectors, once all the supplies on the battle field has been collected, they will have no further use to the commander.

Entirely unarmed, Supply Trucks had to be kept safely away from harm and protected at all times. Being a non-combat unit, the Supply Truck was quite lightly armoured and vulnerable to almost any enemy units, especially tanks and aircraft.

However, being vehicles, they are unexpectedly useful against raiding assault infantry, who they can just run over if they do not move. Useful in particular against the General power Rebel Ambush. Though this tactic is useless against the infantry of General Juhziz, who are wired with explosives.

Unused model
Add an image to this gallery 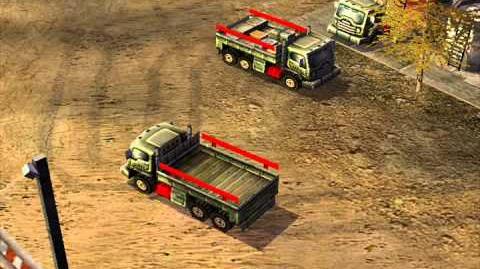 Retrieved from "https://cnc.fandom.com/wiki/Chinese_supply_truck?oldid=228779"
Community content is available under CC-BY-SA unless otherwise noted.