The chrono legionnaire was a high-tech Allied soldier, whose suit and weapon were based on the Chronosphere technology. They were used during the first and second iterations of the Third World War.

The chrono legionnaire could erase enemies from history using his special weapon, freezing them in time as he methodically erased every trace of the unit from the time continuum. While being erased, targeted units were not present in any time stream, and were therefore invulnerable to all weapons. Chrono legionnaires could chronoshift across entire cities and "erase" buildings and units.

Due to the need to make the chronoshift device compact enough to be man-portable, the generators in the suit were not powerful enough for instant timeshifting. Although a legionnaire was instantly thrown into the time stream, reappearing in the desired location, it took time for the legionnaire to reform completely. The longer the distance, the longer it took for him to fully re-enter the time stream.

The legionnaire's weapon is that it does not damage the unit, but erases it from the time stream instead. When attacked by a legionnaire, the unit is frozen and invulnerable. This has the benefit of allowing a well-managed legionnaire to defeat all land units in single combat as the other unit is as good as erased as soon as they are hit. Since legionnaires can only target one unit at a time, they are very much vulnerable to groups of even the weakest unit with anti-infantry capability. The duration of the attack is proportional to the health points of the target. Alternatively, the fact that the targeted unit or building is invulnerable can be used to their advantage by protecting their allies, but with caution not to fire at them for too long.

If the legionnaire fails to completely erase a target due to different orders or death, it will gradually phase back as if nothing had happened. Legionnaires cannot "wear down" targets, they can only destroy them outright or delay them.

Their most noticeable trait is that they do not travel anywhere at all in traditional sense but teleport to destinations instantaneously. This is offset by the fact they need to phase in after teleportions, which renders them frozen. Unlike units affected by its weapon, legionnaires are not invulnerable in this state and can be killed very easily. The length of time it takes to phase in is proportional to the distance they just teleported through. A series of short hops is sometimes preferable, as it will leave them less vulnerable than a large jump.

Another way to reduce the phase time is to use the chronosphere to transport them. Unlike most infantry, the chrono legionnaire is immune to its deadly effects and can be teleported instantly just like a vehicle. Note that if the target destination is impassable to ground units (such as water), the legionnaire will instantly die.

They are not known to operate after the events of the Psychic Dominator Disaster. They are also not present in the War of the Three Powers, as without Einstein, the Allies were unable to miniaturize or perfect their Chronosphere to allow it to be used for a single infantry unit. Instead, FutureTech developed the Cryo Legionnaire. 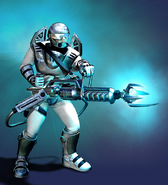 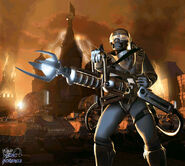 Render as in the Allied (skirmish) victory screen 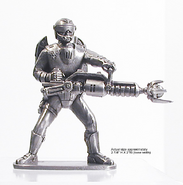 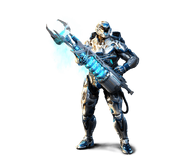 Retrieved from "https://cnc.fandom.com/wiki/Chrono_legionnaire?oldid=240117"
Community content is available under CC-BY-SA unless otherwise noted.