The Chrono miner was the resource gatherer used by the Allies during Third World War and the Psychic Dominator Disaster.

The Chrono miner is equipped with a miniaturized chronosphere-like device, similar to the Chrono tanks developed in Second World War. However, for commanders to be able to manufacture them without a Battle lab, the device was simplified to the point where it could only chronoshift to a location with a special beacon on it. All Allied ore refineries have one of these beacons installed on them, so a Chrono miner can chronoshift back to it after filling its load of ore. The beacon can be installed on a Soviet ore refinery if one is captured.

However, there is a downside to this feature. If more Chrono miners are attached to the same Refinery, only one can unload there at a time. The others will try to go there using their treads. So if they are distant from the Refinery, they are very vulnerable to attacks from all kind of units, since it has no defenses other than the usual ability to crush infantry. The Chronosphere device and power supply require lots of amenities and as a result, the Chrono Miner only has a small cache left for mine deposites. This aspect makes it able to deliver only 500 credits in one unload (1000 if it is loaded with gems). This is compensated by the speed of delivery.

The Chrono miner may only chronoshift to a friendly Ore refinery and will do so automatically when full. It must move conventionally to any other location. They can also be commanded to do so, providing a way to quickly escape when under attack. This can also allow Chrono miners to teleport to a player controlled refinery which is even not directly accessible by wheels, like across bodies of water or across the whole map. This may be significant for going to a forward refinery quickly and efficiently. Chronoshifting will also leave behind any Terror drones that may have embedded themselves in the Chrono miner, but will keep Crazy Ivan's bombs with them.

Chrono miners ALWAYS teleport to the refinery, regardless whether or not it's an Allied or Soviet-type refinery, although sometimes, when not told strictly to go home, they may attempt to roll back on their wheels instead of just teleporting away (this is obviously a bug). If the Chrono miner harvests from an isolated area of the map (e.g. no passable route to the refinery), they also tend to stuck, and must be returned manually to the refinery.

It was not present in the War of the Three Powers, as without Einstein, the Allies were unable to perfect any other technology using the Chronosphere, therefore they developed Prospectors to gather ore. 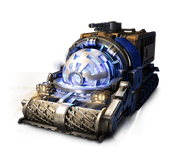 Retrieved from "https://cnc.fandom.com/wiki/Chrono_miner?oldid=240123"
Community content is available under CC-BY-SA unless otherwise noted.