Chronoshifts to any point on the map.

The Chrono Tank was an experimental Allied vehicle that entered service around the time of the Second World War. It appeared in The Aftermath and Retaliation.

This tank is, essentially, a chronosphere on tracks. The tank is armed with two missile launchers that are quite effective against tanks and structures. But the tank has a unique ability: it can chronoshift itself to a desired location once its mobile chronosphere is fully charged. This high mobility is offset by its low durability and the chrono tank is generally not a match for main battle tanks in a direct fight. It is deployed on the battlefield very rarely.

Chrono tanks, due to their special ability, can be decisive in the right hands. They can chronoshift anywhere en masse, due to the fact that each chronosphere can be used independently. In addition, the chronosphere does not automatically shift them back to their previous location, unlike the standard Chronosphere. Also, this Chronosphere does not cause chrono vortices. While the tank has fairly low armour, the firepower is quite good too. An often used tactic was to send a group of Chrono Tanks right into an enemy base, to destroy its power supply, allowing other units such as medium tanks to enter the base without getting destroyed by Tesla coils.

There is a recharge period before the tank can chronoshift again. This is represented by the colour boxes when the unit is selected. Unlike the chronoshift of the Chronosphere, the tank will not automatically revert to its pre-chronoshift position. Each tank must be manually assigned a point to chronoshift to. It is possible to command multiple chrono tanks to chronoshift at once by holding shift and right clicking to the place you want it to go. It is also the most expensive Allied unit in the game.

Some of the most important deployments of the Chrono tanks were in Italy: these include the destruction of a Soviet harbor in North Italy. They were also deployed to destroy the Soviet sub pen that was producing the earliest missile submarines in South Italy. Some of them helped an Allied strike force to rescue Albert Einstein and some other scientists in central Italy.

Chrono tanks were also deployed against a Soviet nuclear missile silo. The tanks destroyed the radar dome and forward SAM sites, clearing the way for the arrival of Tanya Adams and an MCV.

It was not seen again after the war, but its miniaturized chronosphere device was modified and implemented to Chrono miners during the Third World War and the Psychic Dominator Disaster. 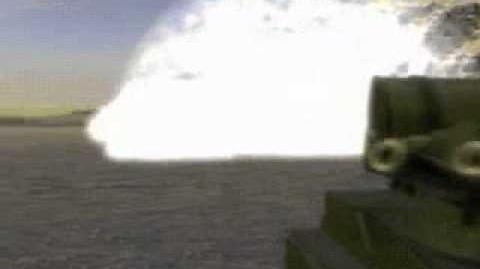 C&C Red Alert - Retaliation - Chrono Tank
Sneaking up behind a heavy tank
Add an image to this gallery
Retrieved from "https://cnc.fandom.com/wiki/Chrono_tank_(Aftermath)?oldid=232908"
Community content is available under CC-BY-SA unless otherwise noted.