The Shrike and the Thorn

Whilst the Soviet Commander was defending Leningrad, the Empire had pushed deeper into Soviet territory, heading directly towards Moscow. As Premier Cherdenko was busy at work inside the Kremlin, intelligence officer Dasha Fedorovich briefs General Krukov that the Imperial forces are advancing towards the Krasna-45 satellite launch facility.

Even though the installation has been inhabited by vagrants, who set up a circus in the area, the launch pad is still functional. Therefore, the General believes that the Commander can launch a support satellite from there to use against the Imperial forces.

Using Sickles to clear out Imperial advanced troops, Natasha and the Commander's team went in and dealt with a small Imperial garrison, including some Imperial Warriors shooting at the shooting galleries in the circus.

The original scouting party of Tesla Troopers were rescued as well, helping to deal with Imperial Tsunami Tanks as well as frying any unlucky Imperial Warriors in their path.

After the Krasna-45 rocket was launched, the Shinzo-led Imperial forces reveal that the majority of the Imperial forces have been hiding inside the circus tents, including nano-cores, an Imperial MCV, and Yuriko Omega.

The Commander and Moskvin's forces fought their way back through where they came from, and wiped out all Imperial forces in the area, using both the Magnetic Satellite and the newly available Orbital Drop protocols.

The Imperial MCV, after taking fire, packs up and retreats, the Soviet forces pursue, only to find themselves led into an ambush, surrounded by hordes of Imperial Warriors as well as Yuriko Omega. However, despite heavy casualties, the Soviet army still prevailed, and all Imperial forces in the area were eliminated.

The mission was a complete success, and the Imperial forces retreated from the Krasna-45 facility in defeat and disgrace. Meanwhile, Premier Cherdenko instructs the Commander to retake the vital ports at Vladivostok, occupied by none other than Emperor Yoshiro's son, Crown Prince Tatsu. 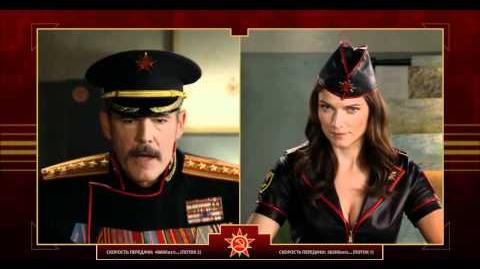