They produced electricity through fusion of atomic cores, and this process could be upgraded at a small fee by installing control rods to effectively double the reactor's output. General Townes tweaked his reactors (dubbed "Advanced Cold Fusion Reactors") to generate about 60% more power by default to supply his defenses and oddly enough, his main battle tanks as well.

General Alexis Alexander also chose to further develop even more efficient, but experimental "Advanced Control Rods". By default her reactors also provided the same amount of power as standard reactors but when upgraded with their control rods, could provide a 300% boost to continually feed her sparse power grid.

Rumor has it that the Chinese General Leang used cold fusion reactors in place of the default nuclear reactors. 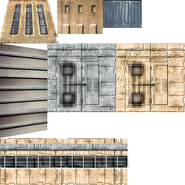 Back side
Add an image to this gallery
Retrieved from "https://cnc.fandom.com/wiki/Cold_fusion_reactor?oldid=237500"
Community content is available under CC-BY-SA unless otherwise noted.