The Comanche is a two-seat stealth reconnaissance and attack helicopter used by Sakura Obata in Renegade.

The helicopter has an aerodynamic frame built with deflecting radar waves in mind, coupled with an autocannon mounted into the tip of the helicopter and rocket pods on retractable racks.

Sakura Obata uses a modified version of this helicopter, given to her by General Gideon Raveshaw, as her preferred method of transportation. It is one of many examples of military hardware the Brotherhood of Nod was able to acquire with its vast control of Tiberium (even though it's not the strongest, as Capt. Nick Parker was able to shoot it down with unguided rockets).

Sakura's Comanche serves as a boss in the last stage of "The Plot Erupts". She will circle the player, firing volleys of rockets and attempting to shoot them with the gunship's cannon. While these weapons deal large amounts of damage, she's a fairly easy boss, as her gunship isn't very mobile and the rocket launcher is quite adequate against the helicopter's armour. In a later mission where Havoc must escape from a Nod prison facility, Sakura, now back on the side of GDI, can be seen in a Comanche hovering above the canyons, although she does not aid the player in any way besides giving Havoc information about the scientists.

In C&C Renegade, there is a glitch when Havoc goes inside the Nod Communications center and exits through the elevator. Sakura will fly near the opening of the nearby garage building and fire in the corner and will continue to do this no matter where the player moves or how many shots he takes on her helicopter. 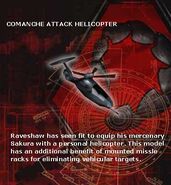 Comanche in real life
Add an image to this gallery

Retrieved from "https://cnc.fandom.com/wiki/Comanche_(Renegade)?oldid=221322"
Community content is available under CC-BY-SA unless otherwise noted.