The Combat Chinook is a variant of the regular USA Chinook developed by General Malcolm Granger.

As well as being able to do all the things that a regular Chinook could - collect supplies, transport units, and perform combat drops - the Combat Chinook also has gunports (like the Humvee) that allow infantrymen transported inside to fire at enemies within range.

Construction of the Combat Chinook requires a USA War Factory to be present on the battlefield.

Fast, agile and equipped with a point defense laser, a Combat Chinook loaded with Missile Defender and Pathfinder was a serious threat to almost every type of unit. Perfect for using rushing and guerrilla tactics, with four or more, it was also able to raze whole bases within less than a minute. Its concentration of fire by one vehicle was unrivaled. Due the the Pathfinders taking out any infantry with extreme ease, only one is needed within each Chinook, while the seven other MDs were able to take out any vehicle or building extremely swiftly. Not only having a large amount of armour, but as the combat Chinook has the PDL, it can effectively defend against many rocket armed enemies. With enough PDLs, coupled with the Pathfinders, a large group of Chinooks can take down nearly a dozen Patriots or Stinger Sites or rocket/missile infantry.

Its fire ports are so advanced that infantry inside Humvees it carries can fire through the port (though the humvee itself can't), making the max capacity to be 12 (2 full humvee + 2 infantry)

The Chinooks, are however completely vulnerable to non-missile based units, with enough fire concentration. Particularly effective were the GLA Quad cannon and Chinese Gatling Tanks or Gatling Cannon in large numbers, and EMP weapons were a serious threat as a single nearby detonation was enough to take the Chinook down. Anti-air units, especially Avengers, can easily take out Combat Chinooks when in groups. Arming them up with sufficient infantry firepower was also expensive and required great micromanagement, as care had to be taken care of should they come across any anti-air opposition. Aircraft such as Raptors and MiGs could also serve as a deterrent to them, though with lesser effectiveness due to the presence of PDLs. 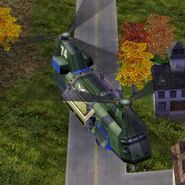 Combat Chinook seen in-game.
Add an image to this gallery

Retrieved from "https://cnc.fandom.com/wiki/Combat_Chinook?oldid=224254"
Community content is available under CC-BY-SA unless otherwise noted.