The Combat Support Airfield was a structure employed in the Third Tiberium War by GDI to supplement regular airfields.

It was equipped with the facilities needed to repair, refuel, and rearm four VTOL aircraft such as the Orca or Firehawk.

While the Combat support airfield was cheaper than a regular airfield and could perform many of the same functions, it lacked the crucial ability to build aircraft. Therefore, a normal airfield must be built prior to the construction of support airfields.

The Combat support airfield was implemented in Kane's Wrath. It appears in Global Conquest games, when there were aircraft present in the strike force but no base with proper airfields. It was also freely buildable from the support structures tab, from both the Construction Yard and from Cranes.

In multiplayer, building a Combat support airfield will cause a desync and end the match. Intentional use of this error is considered an offence on the C&C:Online server. The unofficial 1.02+ patch fixed this issue in Releases 6 and newer. 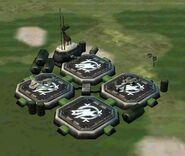 Retrieved from "https://cnc.fandom.com/wiki/Combat_support_airfield?oldid=214669"
Community content is available under CC-BY-SA unless otherwise noted.