The campaigns in Retaliation are similar for Allies and Soviets. Instead of the main force deciding the outcome of the war, the player is assigned to a certain auxiliary command - in the Allies' case, an American detachment led by general Carville, while Soviet commander is under the command of general Topolov, both of which have been entrusted with several "secret projects".

Special Aftermath units such as the Tesla tank, Field mechanic, MAD tank, and Chrono tank are available in later missions. Specific units such as Volkov, the Soviet Super tank and Allied stolen nuclear armed MiG also appear in certain missions. It should be noted that both types of Tesla tanks in Retaliation are represented: the prototype based on the Radar jammer from Counterstrike and the final Tesla tank from Aftermath.

Even though there are different sections for structures, they cannot be both used at the same time. If attempted, the "unable to comply, building in progress" message will be sounded. This sidebar setup is reminiscent of the sidebar used in later C&C games as of Red Alert 2.

The gamepad is a bit slower and less accurate to use than the mouse, however the speed of the gamepad can be increased by holding the R1 button at the cost of pointer accuracy. Like the other versions of C&C on the PlayStation, it does not support the DualShock controller. 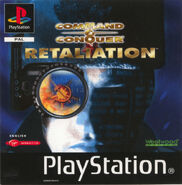 European cover
Add an image to this gallery

Retrieved from "https://cnc.fandom.com/wiki/Command_%26_Conquer:_Red_Alert:_Retaliation?oldid=222540"
Community content is available under CC-BY-SA unless otherwise noted.