The expansion requires an existing installation of Red Alert 2, patched to version 1.006, to play.

Yuri, the powerful Soviet psychic and advisor, disappeared after the Allied victory over the Soviet Union.

The American President Michael Dugan was called to an emergency meeting at the White House regarding Yuri's activities. Yuri disrupts the briefing, revealing to the stunned president that he had built a network of psychic dominators, which he intended to use to enslave the entire planet.

As Yuri activates one of the Psychic Dominator devices on Alcatraz Island, President Dugan orders an airstrike. All the attacking aircraft were shot down, but one crashed on to the nuclear reactor that provided energy to the device, thus powering it down.

Yuri activates the other two Psychic Dominators anyway, turning much of world's population into mind-controlled slaves. As his troops entered San Francisco to capture power plants in order to bring the Alcatraz Psychic Dominator online, Professor Einstein hatched a plan to travel back in time to the events of Third World War in order to stop Yuri and prevent the Psychic Dominator Disaster.

The Allies used Einstein's time machine to travel back in time and destroy the psychic dominator on Alcatraz while it was still under construction.

After their victory in San Francisco, Lt. Eva Lee got into contact with General Carville, who was still alive at the time. Lt. Eva then informed the Allied Commander that Yuri has taken over Hollywood, and has been breaking down mind-controlled civilians in the city using his Grinders to fund his army. The Commander's forces launched an attack on Hollywood and destroyed Yuri's base of operation there, liberating the city and denying Yuri a significant source of income.

At this point, Chariman Bing of the Massivesoft Corporation sent a distress call to Lt. Eva. He told them that Yuri's forces have built a nuclear missile silo, and is threatening to nuke Seattle unless Massivesoft funds his army. Yuri also forced Massivesoft's R&D department to work on a special project, apparently some form of genetic software. The Allies quickly moved into the city and destroyed the missile silo, once again cutting off Yuri's funds.

Unfortunately, Yuri has captured Professor Einstein, and forced him to improve his Psychic doinators in order to complete his psychic network sooner. The Allies tracked him to a secret base in Egypt, and agent Tanya successfully rescued him from the inside of a Pyramid. However, it was revealed that Yuri has constructed a massive base in Egypt, and the one where Einstein was kept was only a small base. With the help of a captured Psychic dominator, however, the Commander managed to demolish Yuri's base and liberate Egypt.

According to Allied intelligence, Yuri planned to kidnap Allied leaders and replace them with clones. Spy satellites revealed that the cloning facility is located in Sydney, Australia. In the end, the Commander's forces successfully destroyed the cloning facility and eliminate Yuri's forces in the city.

Thanks to the Allies' efforts, the outcome of the war stayed the same, and the Soviet Union was forced to surrender. However, with Yuri still at large, the leaders of the two powers have agreed to sign a treaty at a classified location, which would result in the Soviets joining the fight agaisnt Yuri. However, Yuri hacked into Lt. Eva's communications channel, and mind-controlled her into revealing the location of the treaty: the Houses of Parliament in London. This forced the Commander to quickly rush to London in order to protect the world leaders. Yuri sent waves after waves of his forces into London, but the Allied Commander managed to hold the line until the treaty was ratified, and successfully drove Yuri out of London with assistance from the Soviets.

Feeling that she was responsible for putting the whole world at risk, Lt. Eva planned to resign, but was stopped by General Carville. She successfully triangulated Yuri's location from his communications: Antarctica. It is also where Yuri's final Psychic dominator is located. The Commander's forces started their assault on Yuri's final base by capturing an abandoned Soviet base in Tierra del Fuego. They set up a Radar Tower and held off Yuri's forces long enough for an Allied MCV to be Chronoshifted in. Now armed with the arsenal of both powers, the Commander launched a devastating attack on the Psychic dominator, demolishing it and wiping out the last of Yuri's forces.

Yuri was captured by the Allies and imprisoned inside a Psychic Isolation Chamber invented by Einstein himself, where he "won't be able to mind-control a fly". Just as General Carville congratulates the Commander, the two timelines began to merge.

In the new timeline, instead of Yuri, it was General Carville who interrupted the emergency meeting at White House, much to the shock of President Dugan. Meanwhile, Tanya invited the Commander to the victory gala, just like she did in the previous timeline. However, she was interrupted by Lt. Eva this time, who also invited the Commander to attend. Tanya complained to Einstein that he didn't get the timeline straight, and asked to be sent back to two hours ago. She then, with a wink, told the Commander that she'll catch him on the replay.

In the Soviet campaign, the Commander is informed by Lt. Zofia and Premier Romanov (imprisoned in the Tower of London) of Yuri's activities and the Allied Time machine. He was then sent with a small force to San Francisco to capture the Allied time machine. The Soviets hijacked the time machine and used it to travel in time.

However, the Soviets unwittingly gave the time machine too much energy, and they arrived back in the age of the dinosaurs. The Soviets defended the time machine against T-Rexes while Zofia and the others attempted to fix the mistake. The Soviets finally arrived to the correct time, during the occupation of San Francisco, at the very brink of the Third World War. Taking over an existing Soviet base, they destroyed the Psychic Dominator while still under construction.

The Soviet forces from the future made it to Moscow, where they informed the past Premier Romanov of the Soviet defeat that was to take place, mentioning also Yuri's betrayal. The Commander is sent to the Black Forest in Germany to destroy Einstein's Laboratory and the Chronosphere to cripple the Allied war effort. This is essentially the same mission as Operation: Mirage in Red Alert 2, but from the perspective of the Soviets (hence the name Operation: Deja Vu). This time, the Soviets defeated the Allies. Shortly after, the Allies surrendered completely. They now fight with the Soviet Union against the traitor Yuri.

The Commander was sent to London to destroy Yuri's Psychic Dominator there, liberating a mind-controlled Allied base in the process. His triumph wasn't long, as Premier Romanov's plane was shot down above Morocco. Finding Romanov was the easy part (he was found partying with the locals), however Yuri's forces have entrenched themselves around the airport. The Commander destroyed Yuri's forces and evacuated the Premier from the airport.

After this victory, the he was sent to an uncharted island in the South Pacific which served as Yuri's submarine base. During the destruction of Yuri's headquarters there, it was revealed that Yuri has a launch facility on the island. The rocket was programmed to fly to the Moon. The Soviets used the rocket to send troops to the Moon in order to destroy Yuri's secret base there.

Facing certain defeat, Yuri took refuge in his ancestral castle in Transylvania. Two bases, one Allied and one Soviet, were already built there, but were mind-controlled by psychic beacons. The Commander easily destroyed them, liberated the two bases and razed the castle.

Yuri was revealed to be alive. He wasn't in the castle at the time, but has instead captured the time machine, telling the Commander: The whole world and all of its history is mine to command and conquer!

Lt. Zofia, recalling the experience of being stuck in the Cretaceous Period, quickly redirects the time machine there and deplete its power reserve. Yuri is stranded in time and is presumably eaten by a Tyrannosaurus Rex.

The Soviet Union imposed communism over the entire world and began to build on its space program, ready to expand their glorious cause into the rest of the solar system.

Yuri's Revenge was already announced in a way in the Soviet ending cutscene of the original Red Alert 2, with Yuri's final line: It would have been good to see inside your mind, Comrade. I still may get a chance.... However, nothing in the Allied campaign implied an upcoming expansion pack.

Originally, Yuri's Revenge was due to release in September, but the 9/11 attacks halted the process, as the cover art featured annihilated civilian buildings, like in the original Red Alert 2. The package was changed, with the destroyed buildings removed. Some later releases of the base game (like the Australian Replay budget release) were also censored.

Allied base in London. A gray-helmet version of the Guardian GI is seen

Final design (USA cover)
Add an image to this gallery

A third playable faction in the form of Yuri's Army is available, marking the first instance a Command & Conquer game had three completely distinct factions. The theme of Yuri's Army are mind control and other forms of manipulating enemies, such as gases from Chaos Drones causing enemies to temporarily fire on their comrades, as well as genetic engineering, with brutes being the prime example.

The Soviets lose the Psi-Corps trooper (Yuri), as it is transferred to Yuri's Army as the Yuri clone, available for $600 with a Psychic radar.

They also lose the Cloning vat and Psychic sensor, as they are transferred to Yuri's Army, with the latter being repurposed as a radar equivalent with the Psychic reveal ability. 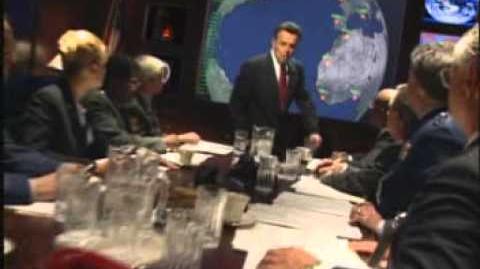 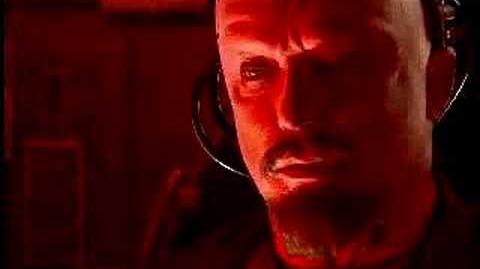 Udo Kier 2001 interview for GameSpot
GameSpot's 2001 interview with Udo Kier
Add an image to this gallery
Retrieved from "https://cnc.fandom.com/wiki/Command_%26_Conquer:_Red_Alert_2_-_Yuri%27s_Revenge?oldid=235866"
Community content is available under CC-BY-SA unless otherwise noted.