Unlike previous C&C expansion packs, both campaigns have FMV briefings for all missions. It is also notable as the first game in the franchise where both singleplayer campaigns — GDI and Nod — are canon, occurring simultaneously and forming one connected storyline. In previous titles, only the ending for the "good" side (GDI/Allies) was considered canon. This approach would not be repeated until Command & Conquer 3: Tiberium Wars.

The year is 2034, and the Second Tiberium War is closing to an end. The Brotherhood of Nod has lost its leader, Kane, and the Inner Circle is fracturing the organisation. Its remnants, under the command of Anton Slavik, are on the hunt for the Tacitus, which is currently under research by GDI. The Kodiak was on its course to deliver the Tacitus to the Southern Cross base, but is shot down by an ion storm. Both factions search for the Tacitus in the Kodiak wreckage, but GDI seems to be faster.

While Nod was busy throwing GDI forces into disarray with the help of the reactivated CABAL, GDI was attempting to restore order in several sectors, defending the civilians from Tiberian beasts (like the newly discovered Tiberium Floater). GDI was caught off-guard when Tratos was assassinated, and that event stroke a terrible blow to the Tacitus research process, as he was the only one who could decypher it. Time is running short, as Dr. Boudreau predicts that the Earth's atmosphere will be 100% toxic to humans in less than a year. To speed up the Tacitus research, and with it the process of Earth's recovery, GDI decides to capture CABAL.

Meanwhile, CABAL goes rogue and does not respond to Slavik's commands anymore. It has developed its own will and desires the Tacitus for itself. GDI manages to capture it, but the second fragment of the Tacitus is missing. When it was found, and the assembled Tacitus was loaded into CABAL's matrix, a cyborg army surrounded the Daedalus Team and murdered the Inner Circle members.

General Cortez and Slavik were left in front of an unthinkable decision - they've made a temporary alliance to organise a joint assault on CABAL. GDI attacked the Cyborg production plant, while Nod destroyed the civilian harvesting station. Surrounded by Nod and GDI forces, CABAL unleashes its Core Defender, an almost invincible giant walker that caused great casualties to both armies. However, it was eventually defeated, and CABAL's core was destroyed. GDI is able to decipher the Tacitus' data, containing a vast wealth of knowledge, and Nod celebrates their triumph. At the end of the Nod victory cutscene, Kane is shown in a cryo-chamber, still recovering from his duel with Michael McNeil. He seems to have been connected to what was left of CABAL's memory and, eventually, their personalities seem to merge.

Firestorm adds new campaigns for both sides, both of which are canon, and which occur simultaneously. The game's executable has been modified to run both Tiberian Sun and Firestorm by choosing either game upon running. New units for both sides have been added, including:

Juggernauts fire three rounds instead of one and can be received at the start of a multiplayer game, unlike the Nod Artillery. The Artillery is also reported to have an undocumented precision reduction. Jump jet infantry has been refitted to spot stealthed units.

The expansion pack also added a new turn-based mode "World Domination", with a similar design later seen in Red Alert 2 and Yuri's Revenge. It was only playable through Westwood Online, while its successor XWIS lacks the necessary code.

Firestorm, along with Tiberian Sun, has been made freeware by EA in February 2010. The freeware release was based off the version built into The First Decade. Due to an error, the modified executable is unable to read movies03.mix, which holds the Firestorm-specific cutscenes in the regular CD release, and all Firestorm cutscenes were ported to movies01.mix along with vanilla Tiberian Sun GDI cutscenes, hence the noticably higher size of the latter file.

European cover
Add an image to this gallery 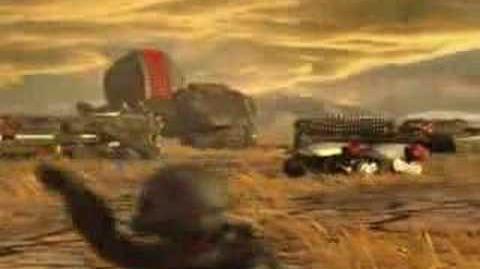 Retrieved from "https://cnc.fandom.com/wiki/Command_%26_Conquer:_Tiberian_Sun_-_Firestorm?oldid=224161"
Community content is available under CC-BY-SA unless otherwise noted.