Fifteen years ago, Command & Conquer 3: Tiberium Wars was released. It was first mainline Tiberium universe game in 8 years since the release of Tiberian Sun in 1999 and brought C&C back to the gaming public for the latter half of the 2000s.

Be sure to check out the game on Steam, the active multiplayer community on GameReplays and the battlecasts by Sybert, the latest mods in development, and the recently updated 4K add-on remaster for its expansion pack.

Last year, Wally Wingert, the voice behind Captain Nick "Havoc" Parker, gave a shout out to Renegade community and thanks for 19 years of support!

Wally Wingert thanks the C&C Renegade community for 19 years of support!

RenHD is a fan modification that aims to remaster Renegade and incorporate many other new features. The official beta has been released to celebrate 20 years of Renegade.

Check it out here: https://ren-hd.com/

Firestorm, formerly Renegade X: Firestorm, will be having an open infantry beta in summer 2022.

Firestorm: Sounds of the Battlefield

Join the Renegade community and get the latest info on community events and projects:

The Renegade community will be celebrating its 20th anniversary from February 19 to 27. Be sure to join the Command & Conquer Discord and check out the exciting events planned throughout the week. 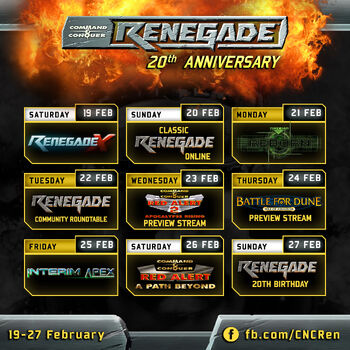 Join the Renegade community and get the latest info on community events and mods:

Kane has graced us with his return!

And has some "classified intel"...

Jim Vessella answered the hottest question of the C&C remasters - the cutscenes! Many original tapes were found but crucial original footage was not - therefore, upscaling will be the option of choice. Retaliation cutscenes will be included, as will B-rolls as unlockable items.

The gameplay reveal of Command & Conquer: Remastered has been published, and a new website has been launched!

Beta version 0.09c of Command & Conquer: Red Alert has been discovered and published!

Jim Vessella has posted a new update on the C&C remaster soundtracks, including the jukebox feature and samples of three tracks remastered by Frank Klepacki himself.

We are saddened by the news of the passing of Eric Alan Martin, the Las Vegas actor best known to the Command & Conquer community for his role as Mark Jamison Sheppard. 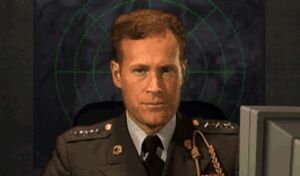 Our condolences go to his family and friends.

The first titles to be remastered are Command & Conquer (1995) and Command & Conquer: Red Alert, with their respective expansion packs. The project is supervised by Electronic Arts producer Jim Vessella but is done by, get this, Petroglyph Games and Lemon Sky Studios.

Look Who’s Coming Back for the Command & Conquer Remasters

Here is an official post from EA, and here is an expanded version with a few words from Joe Bostic of Petroglyph.

Welcome to C&C on Gamepedia

As an overdue follow-up to our initial announcement, the Command & Conquer Wiki (EVA Database) is now officially open on Gamepedia. With the only active administrators (myself and Ssskoopa, here called SuperFeatherYoshi) moving to here, the Wikia version will no longer be managed and everyone is advised to use the one on Gamepedia. We've also been cleaning up some higher-tier articles in the meanwhile, such as Global Defense Initiative and Scrin, so we aim to become the definitive source on anything and everything Command & Conquer in the coming months.

Note that moderation here will be even more rigorous against fan fiction, which has damaged the reputation of the wiki in the past. We have already cropped many articles and there's still more to go. We will be posting in the new admin noticeboard in the coming days to help you help us in that endeavour.

And finally, in the name of the administration at the EVA Database, I would like to thank the Gamepedia/Curse staff for their immense help and patience, as well as their readiness to bring us to their platform.

Those of you who have followed the news around the Fallout Wikia you may have noticed that Wikia/Fandom has been doing network-wide changes which wiki admins do not have control over. From their talks with Wikia/Fandom staff, we can clearly see that the folks above are not really interested in wikis, which made them big and popular in the first place, and instead try to focus on forced video content and articles as "quaint" as this one. And we did not forget their forcing of auto-playing video content that can not be changed or removed, or backend updates silently breaking a useful template that was only fixed this year.

The active administration (Ssskoopa and myself) have decided to move over to Gamepedia, which is already home to The Vault the Fallout Wiki made the jump years ago), the Official Witcher Wiki, Wowpedia, and the up-to-date Overwatch Wiki, to name a few. Their business model puts wikis first and everything else second.

We will update this post once the move procedure ends and we get an official URL.