Not to be confused with Command & Conquer: Red Alert 3: Commander's Challenge.

The Commander's Challenge is a special feature introduced in Command & Conquer: Red Alert 3: Uprising. In this mode, the player controls a FutureTech Commander, who must collect technologies from the three major powers by defeating enemy commanders all across the world.

In Commander's Challenge, the player is pitted against nine commanders from the three major factions in 50 challenges all around the world, each with its own unique rules and conditions.

The player has access to the arsenal of all three factions, and can select which faction to use before each challenge. However, only the most basic units and structures are available from the start. Technologies can be unlocked by completing challenges, which can then be used in all subsequent challenges. All challenges can be replayed at any point.

After completing a challenge, the "completion gauge" in the main page will fill up by 1% if the elapsed time is longer than the par time, and 2% if shorter. 100% completion can only be achieved by completing every challenge under their respective par time.

The Red Alert button, which was cut from the original Red Alert 3, is made available in Commander's Challenge, though its effects have been drastically changed. It is an emergency button that can only be activated when the Threat Meter is completely full. When pressed, it empties the Threat Meter, gives the player 50,000 credits, and promotes all of the player's units to Heroic veterancy. However, using the button turns the record time to 99:59, making it impossible to complete the challenge under par.

Kelly Weaver greets the Commander, explaining to him that FutureTech has already acquired the Construction Vehicles of all three world powers, and instructs him to take advantage of the post-war chaos to acquire the military assets of the Allies, the Soviets, and the Empire. Though she never explains what FutureTech intends to do with the technology.

After finishing all main challenges, Weaver congratulates the Commander on his progress and offers to discuss the terms of the Corporation's offer with him "in private this evening".

Completing all main challenges unlocks the "Commander's Challenge Conclusion" cutscene, and adds a star to the "Challenge" section of the main menu. It also unlocks this congratulatory message:

Completing all side challenges unlocks the "Commander's Challenge Bonus Ending" cutscene, and adds a second star to the main menu. It also unlocks the following message:

Completing all challenges under par times and achieving 100% completion adds a third star to the menu, causes stars to fall in the menu's background, and unlocks the following message: 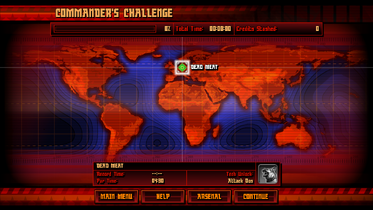 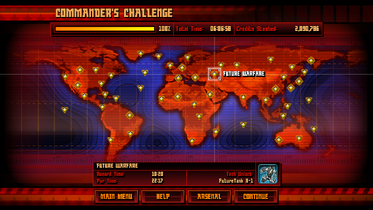 Commander's Challenge map, with all challenges completed under par time 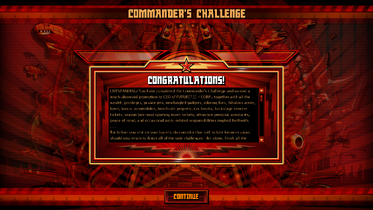 The congratulations screen shown after completing the main challenges 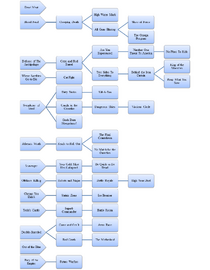 Flowchart of Challenges
Add an image to this gallery 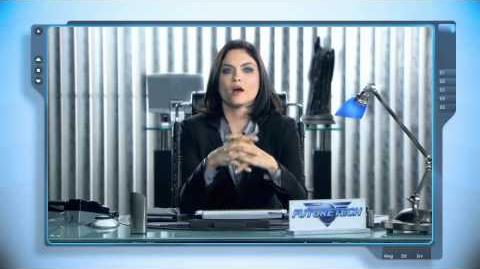 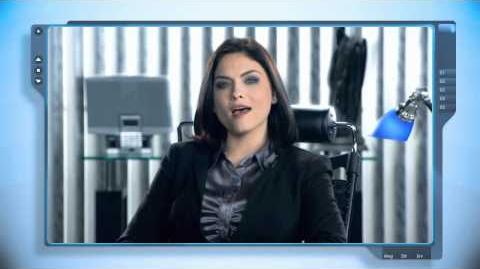