During the First Tiberium War, communications and radar uplinks were all being coordinated from a single facility in military bases - the Communications Center. It was a low-profile single story structure with most of the facilities located below ground level. It's construction was sturdy, to endure all but the heaviest punishment. It's distinguishing feature was a tall radio mast, which was it's link to the outside world.

Inside, numerous status displays were present as well as a holographic projector for briefing commanders. Below, the facility's main command center was located as well as the private communication chamber, the mainframes and the heart of the facility, the Master Control Terminal.

The structure was in use by both the Global Defense Initiative as well as the Brotherhood of Nod. GDI developed an advanced version of this structure, capable of interfacing with the orbital ion cannon. Eventually, as communication systems were miniaturized and became more advanced, the need for a separate building dealing with communications stopped, its role taken over by dedicated radar stations. 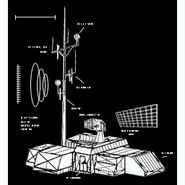 Schematic
Add an image to this gallery
Retrieved from "https://cnc.fandom.com/wiki/Communications_center_(Renegade)?oldid=217520"
Community content is available under CC-BY-SA unless otherwise noted.