The component tower was a modular base defense structure that GDI utilized during the Second Tiberium War and the Firestorm Crisis. The tower itself was just a plug into which a defensive weapon could be installed. This allowed a GDI commander to place a number of empty towers and install the actual defenses later on. The three defense options were:

Component towers themselves could be deployed as part of a wall, opening up new defensive options. Any upgrade placed upon a damaged component tower would also have a side effect of fully repairing the tower (possibly due to coding limitations). In addition, selling a component tower that is connected to a wall damaged all walls attached to the sold structure.

Component towers were decommissioned following the Firestorm Crisis in favor of combat-ready structures like in the First Tiberium War.

Attacking stealth tanks in a cutscene 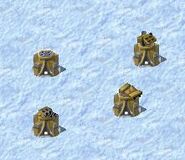 in snow theater
Add an image to this gallery
Retrieved from "https://cnc.fandom.com/wiki/Component_tower?oldid=226909"
Community content is available under CC-BY-SA unless otherwise noted.