The Han Industries AR7 chain gun[1], also known as the Condor is a small arms weapon available in Renegade.

GDI and Nod equipped the AR7 to their officers. The belt-fed six-barreled weapon had a high rate of fire (up to 2000 rounds per minute), but this also meant that it used ammo faster.

The Condor has a modified gas system and the bolt lock, so that it could support the 7.62 mm NATO standard ammunition.[2]

The minigun is one of the best weapons in the game against infantry. It has 100 bullets per magazine with 400 rounds of spare ammunition, just like the Cobretti AR-70, but deals more damage and has a more powerful warhead (more effective against infantry). In multiplayer, it's easily acquirable, as it comes standard with officers of either side, for just 175 credits.

Just like the Raptor automatic rifle, it is only marginally effective against lighter vehicles, and nearly worthless against heavier vehicles.

However, compared to most other late-game and high tier firearms, the minigun's usefulness diminishes. Still, it has superior firing range and rate, albeit a bit inaccurate. 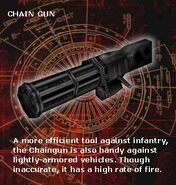 Retrieved from "https://cnc.fandom.com/wiki/Condor_chain_gun?oldid=226317"
Community content is available under CC-BY-SA unless otherwise noted.