Conscripts are the Soviet basic infantry trained during the War of the Three Powers. Simple riflemen in greatcoats, they heavily resemble the basic Rifle Infantry of the altered Second World War featured in the first Red Alert.

While Anatoly Cherdenko altered the timeline by removing Albert Einstein, conscripts still remained the foundation of the Soviet army. However, there was some difference between these and the previous Conscripts. The Conscript of Red Alert 3 is much less armored, and equipped with an ADK-45 assault rifle rather than a PPSh-41. They also come equipped with Molotov Cocktails.

In the Soviet Union, military service is understood to be a rite of passage, for boys and girls alike, into a patriotic adulthood. And, much like the onset of age, this rite is not optional. Opportunities do abound, and based on a child's scholastic achievement and parentage, he or she may end up serving either behind a desk or behind a machine gun for the glory of Russia and all her sister republics. Among the entirety of Soviet youth entering the armed forces, a large percentage consists of boys of unremarkable strength, intellect, or pedigree. These boys, once properly trained and equipped, are boys no longer: They are conscripts.

The millions of drafted boys destined to become conscripts tended to have no distinguishing attributes or patronage. Training had a heavy theoretical component with an emphasis on raising morale and reinforcing indoctrination learned earlier in life, (such as how to properly fire a gun, salute high-ranking officials, cry out authorized Soviet war cries, etc.). In addition to this, conscripts were often promised great reward for their service, motivating them further. By comparison, technical skills, such as marksmanship, merited relatively little time and swimming was completely ignored, reportedly due to fears of desertion.

The Conscript Training Programme was regarded as highly efficient by the Soviet Union. Exit polls suggest conscripts come away from this video series genuinely inspired and enthusiastic for combat, (and the few that are unsatisfied typically are sent to the gulags straightaway). However, the poor training they received meant that they possess the shortest average combat lives out of all the Soviet forces. Conscripts rarely lived above 26.6 years before being killed or (more rarely) promoted. From gathered intel, the average Conscript's training includes:

-Basic operation, maintenance, and usage of the ADK-45 assault rifle.

-Learning about common combustable liquids and where to find them on the battlefield.

-Cooking up to 10 different types of meats, including deer, rabbit, rat, crow, and horse.

-How to obtain field promotions.

All of this training is packed into two weeks. Every day, the recruits are called into their nearest Barracks for a mandatory three hour lesson, where almost all of the information is taught through video.

Conscripts were armed with the battle-proven and easily manufactured ADK-45 assault rifle. The rifle was inexpensive to manufacture and fired 7.62mm rounds effective against infantry but weak against vehicles. Equipping new conscripts made extensive use of battlefield salvage. The bayonet seen on one of the propaganda poster is clearly not standard equipment as Conscripts in the battlefield rarely used them. In-game, the ADK-45 is a decent burst-fire weapon that is best used in mass fire. It is effective against enemy infantry, but struggles against vehicles. However, it is a decent enough generalist armament, and with enough Conscripts one can even destroy enemy tanks with the gun.

Conscripts gain the Molotov Cocktail which allows them to clear garrisons. According to the official website, the Molotov Cocktail was "named for the great Soviet bartender who first invented the concoction in exasperation when his patrons refused to leave his establishment." Based on this knowledge, it can be assumed these Molotov Cocktails are poisonous as well as flammable, but apparently some Conscripts have tried drinking it anyway as "Reports of conscripts drinking this substance for pleasure, and subsequently falling ill or dying, are described as 'patently false' by the Soviet media.". This cocktail is easily made (with main ingredients being fuel such as petroleum or kerosene and motor oil, all available in great supply). Conscripts may carry these in either specially designed containers or everyday glass bottles. The Molotov's fire will produce tear inducing smoke (due to impurities and battlefield condition). Molotov cocktails are highly effective against garrisoned buildings and are reasonably powerful versus vehicles and normal buildings, but take time to fly and can be dodged by quicker targets.

The Allies often ran into en-mass Conscript attacks in the early missions, such as Ride of the Red Menace, but most were dealt with by superior defenses and tactics.

However, when the Allies and Soviets worked together against the Empire of the Rising Sun, they proved to be good defenders along with their counterparts, the Peacekeepers, specially when the coalition invaded the floating fortress in the North Atlantic (even as both parts were constantly in tension).

In the Soviet campaign, the lowly Conscripts actually play a much bigger role in the Soviet Perspective. They fought in many of the Union's most vital battles, including the Defense of Leningrad, the Battle of Vladivostok, and the Battle of Geneva. However, the greatest moment for the Conscripts was during Operation: To Tame a Living God.

During the operation, a Conscript and a War Bear, the sole survivors of a massive paradrop, managed to sneak past the Imperial guards inside the Emperor's Palace and assassinate Emperor Yoshiro himself in his own garden. Despite the fact that the "Emperor" they killed was actually a robotic body double, and the fact they were captured immediately afterwards by Imperial forces, they were eventually rescued and taken back to Russia, where they were presumably treated as national heroes and given many honors for their unquestionable bravery.

Battlefield reconnaissance has revealed at least these facts about the Conscripts:

• Loaded to bear -- Conscripts' assault rifles are adequately powerful against enemy infantry, especially since conscripts tend to outnumber their enemies. And their Molotov cocktails are a useful alternative against structures and slow-moving targets.

• Cheaply trained -- Probably the best thing to be said about conscripts is that the Union has managed to completely streamline their training to make them very affordable for use in battle. Yet these men's value is limited: Their weapons lack the range to hit aircraft, nor can they swim.

• Poorly defended -- Seeing as how conscripts don't even get a proper pair of socks to wear, just imagine what modern weaponry must do to them. In practice, they are small enough to avoid serious damage from anti-vehicle weapons, but cannot withstand much small-arms fire.

• Smoking out the bad guys -- Thanks to their Molotov cocktails, conscripts are surprisingly effective against enemies taking position in structures. A few lucky cocktails flung through a window are likely to eliminate any hostiles inside, without setting the entire place ablaze.

Upon exiting the Barracks

In comparison to their Red Alert 2 counterparts, the conscripts in Red Alert 3 appear far less equipped both aesthetically and experience-wise. Their predecessors sported a pressed steel alloy helmet with a breathing apparatus, a pair of alloy steel plated shoulder pads, a revolver, and a bandolier loaded with munitions. However, the Red Alert 3 conscripts are stripped of all of these accessories, leaving them with their signature trench coats and ADK-45 assault rifles, possibly for economic reasons due to their short life expectancy. In fact, the ushanka and the shinel (trench coat) is the non-combat winter uniform; Soviet troopers would at least trade their fur hat for a helmet, and later the shinel for body armor before going into combat (although a cut-down shinel was usually worn under WWII-era SN-42 steel breastplate to absorb bullet impacts).

The ADK-45 seems to be the alternate history version of AK (Not AK-47, same as the PPSh, not PPSh-41) or maybe the successor to it. It is quite plausible that Mikhail Kalashnikov was still involved (note the A for Avtomat, while D and K stand for designer's surnames), although he got into armament design after being wounded in World War Two (he had been a tank driver). The placard with a bayonet also depicts a barrel attachment characteristic of later AK models

The Molotov cocktail is named for the Soviet foreign minister of 1930s, and was first "served" in the Spanish Civil War; the Soviets later perfected it to be self-igniting—and poisonous. The British Home Guard went one step further, issuing a bottle launcher. 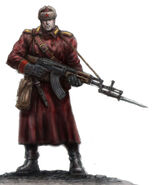 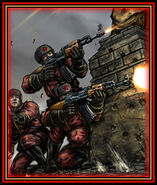 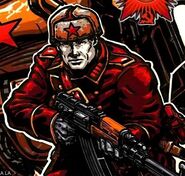 Propaganda poster 4
Add an image to this gallery

Retrieved from "https://cnc.fandom.com/wiki/Conscript_(Red_Alert_3)?oldid=231715"
Community content is available under CC-BY-SA unless otherwise noted.