Strong vs infantry and structures

The Corrupter was a Scrin biological support walker during the Third Tiberium War.

Each Corrupter is equipped with a large tank containing a viscous, Tiberium-based liquid. Corrupters use a launching system inside their "mouths" to mix a strong acid with the Tiberium-based liquid and spray the solution at enemy targets - either to rapidly decimate enemy infantry squads, clear garrisons or degrade structures.

In contrast, the sludge has a regenerative effect on other Scrin units - and as a result, Corrupters had been seen spewing it on allied Scrin units for battlefield repairs.

The Corrupter is primarily useful for its spray-healing ability, which is cost-effective due to the vehicle's relatively low price. As a weapon, the short-ranged spray is lethal against infantry and effective against structures but fares poorly against heavily armored units. Corrupters and Buzzers are the only Scrin units capable of clearing garrisons.

In Tiberium Wars, the Corrupter may occasionally create visceroids when it kills enemy infantry. These visceroids will attack their "parent" corrupter for a short time (causing no real harm), then come under its owner's control.

Despite the information in the unit's tooltip, the corrupter does not cause visceroid spawning in Kane's Wrath. 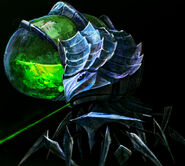 Add an image to this gallery
Retrieved from "https://cnc.fandom.com/wiki/Corrupter?oldid=226263"
Community content is available under CC-BY-SA unless otherwise noted.