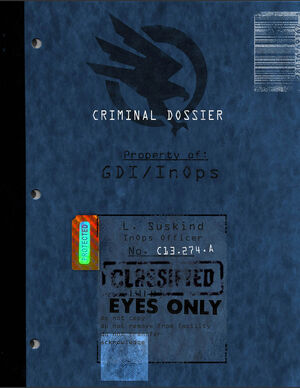 We've uncovered a recently declassified GDI criminal dossier on The Brotherhood of Nod's enigmatic leader, Kane. Compiled by former GDI InOps officer Lia Suskind, who ultimately defected to Nod at the onset of the 2nd Tiberium War, this dossier is the product of years of research on the myriad of myths surrounding Kane. Parts of this dossier had been withheld or blacked out by GDI intelligence, and now we're making it available to you for the first time.[1]

In most previous intel reports on Kane, it's my belief that the man himself has not been properly profiled. Much of Nod's success has been attributed to the allure of Tiberium itself and the power it represents. While this is partially true, my findings over the last eight months of investigation should shed some more light on Kane himself and what makes him tick. Just to recap:

Kane has been the leader of the Brotherhood of Nod ████ CENSORED █████. From 1995 to 2019 Kane stealthily traveled the globe one step ahead of GDI discreetly spreading his message of a Tiberium revolution.

During this period, Kane smartly used GDI's good intentions against them. His accusation that GDI was hoarding Tiberium for the developed nations it represented enraged - by design - the downtrodden and disillusioned in dozens of developing nations. But Kane had another advantage: GDI was selling fear, he was selling hope. Still, it wasn't just the message. Kane has an undeniable charisma and a keen understanding of human psychology. It was these qualities that helped him build his army and his empire. Loyalists would fight for Tiberium, but they would die for Kane. I believe this is a very important distinction to make.

During the First Tiberium War very little intel on Kane's background was gathered. All we had were the rumors of his past circulating in the media. It was from these rumors that Kane's legend grew, inspiring millions to join his cause. It's my belief that if we had spent as much time trying to understand Kane as we have trying to understand Tiberium, we might not be in this situation today, on the brink of another world war.

Towards that end, the remainder of this report will focus on Kane's personal history. the intention is to sort the fact from the fiction, in an effort to help us understand his motives and, possibly, better anticipate his actions.

Unfortunately, our best source of information on Kane's origins comes from Jannero Drake's unauthorized and unapologetically biased biography1, that was seized before it could be published. Here's a particularly revealing excerpt:

"Those excommunicated from Nod recall a common belief among many loyalists, that Kane is none other than the biblical Cain, the first son of Adam and Eve and brother of Abel. Of course, if one were to take these statements at face value, it would make Kane several thousand years old, if not older. But logic and rationality have never been the cornerstones of NOD, nor of any religion. [Unknown to Drake or the compilers of C13.274.A, Abel's tomb was located by Captain Nick Parker in the Cairo Temple of Nod, in a place referred to by Kane as the first Temple of Nod]

For this part, Kane is far too cunning to confirm or deny such nonsense. In this modern era, so devoid of spirituality, Kane realizes that his true power lies in the deep mysteries surrounding Tiberium as well as himself."

While Drake disparages the theory that Kane was involved ██████ CENSORED ██████, it is interesting to note that classified CIA intel files reveal the presence of a man, closely resembling Kane, ████████████ CENSORED ████████████. Obviously, this would make Kane's present-day age near 125 and, therefore, the connection is impossible. Unless, of course, there were any truth to the notion of the man being immortal.

Summary: While it is easy to dismiss Kane as a sociopath with a messianic complex, there is clearly more to the man than a criminal mind. He is a dangerous-but-fascinating figure, arguably the most powerful man on the planet given his intimate knowledge of Tiberium. It is also important to bear in mind that, according to ex-Nod members, Kane first began prophesizing Tiberium █ CENSORED █. This implies that either ████ CENSORED ████ Tiberium, or that Kane was a true prophet whose predictions into the nature and potential of the green matter demand further analysis.