Barbarians at the Bay

Crumble Kremlin Crumble is the eighth mission of the Empire campaign in Command & Conquer: Red Alert 3. It was the operation in which the forces of the Empire of the Rising Sun defeated the Soviet Union by assassinating the Premier of the USSR, and destroying the following targets:

The Barbarians at the Bay was an unpleasant experience for the Empire; the mainland had been attacked and Japan's population now lived in fear of another invasion attempt by the combined Allied-Soviet alliance. As a result, homeland security was stepped up on the order of the Prince; all Imperial forces were placed on high alert, and the Empire's aircraft squadrons were prepared to launch at the first sight of trouble. The Imperial naval fleet was also instructed to carry out more frequent patrols of Japanese waters to detect any further incursions. The evacuation of all major coastal population centers also began within hours of the end of this Yokohama incident.

Turning his attention to the Russian Front, Crown Prince Tatsu was determined to crush the Soviet Union and the Soviet Time Machine once and for all, to stop the threat they both posed to the divine destiny of the Empire of the Rising Sun. Soon after the failed attack on Yokohama, he and the Imperial Shogunate began organizing the Empire's forces on the Russian Front for a full scale assault on Moscow itself. The Imperial Commander and Kenji Tenzai were chosen to lead the attack on Moscow.

Their objective was to raze the Kremlin to the ground, capture or destroy the Soviet military infrastructure and hardware within Moscow, and to assassinate the Soviet Premier, Anatoly Cherdenko, along with the Union's most senior military leader, General Nikolai Krukov.

At this point, the war on the Russian Front was fully in favor of the Empire of the Rising Sun. Most of the land east of the Volga River was already under Imperial occupation, including the city of Stalingrad (see To Conquer Shattered Spirits). The Shogun Executioner was also on the rampage, only a few kilometers downstream from Moscow. Immediately it was ordered by the Shogunate to make it's way up-stream in order to rendezvous with *Name Classified* and General Tenzai's forces. The Imperial strike force itself carefully made its way through the lightly guarded Russian countryside, to infiltrate the city undetected.

The full might of the Imperial military along with the Shogun Executioner was unleashed upon the city. The Soviets, however had employed their full arsenal against the Japanese in their last stand. The Premier's guards was also called into battle with the Kremlin's garrison.

Imperial forces quickly (and literally) cut down Soviet forces (who were surprised by the Sudden Transport's cloaking technology) manning the first checkpoints in order to clear room for the Imperial MCVs and Nanocores to deploy. These bases would serve as staging points for Imperial reinforcements for the attack on Moscow. Even after the base had been completed, the Shogun Executioner (due to its painfully slow speed) had not yet arrived within the battle-space. Imperial forces were then instructed to hold the line until the Shogun Executioner had arrived.

By that time, the Premier was aware of the arrival of Imperial forces. On his command, he ordered the two last field commanders to besiege the Imperial bases with the military garrison of Moscow. The one commanding mainly the Soviet infantry decided to launch quick attacks to distract the Imperial forces while General Krukov dispatched reinforcements. Leading these assaults were some of the Union's most elite Apocalypse Tanks and V4 Rocket Launchers. Elements of the Moskva River naval strike group were also inbound to support the attack on the Imperial bases from the Moskva River (which ran through Moscow and next to the Kremlin). Braving of fierce resistance, Imperial forces held fast with numerous casualties while waiting for the Shogun Executioner.

Destruction to the Soviet Army

The Shogun Executioner finally showed up, bringing death and destruction in its wake. It was quickly send into the first perimeter defending the Kremlin, destroying everything within its range. The VIP Bunkers were captured, allowing the Imperial forces to take control of the Soviet field commanders, as well as their forces assigned. After the final perimeter was destroyed, a large force of Apocalypse Tanks, Rocket Angels, Wave-Force Artillery, V4 Rocket Launchers and other units were moved in front of the entrance to the Kremlin. The Commander fired a Psionic attack on the Kremlin to destroy the few remaining guards and then promptly ordered all units to attack simultaneously, resulted in a devastating explosion, completely destroying the Heart of the Kremlin.

Destruction to the Infantry Base

After the arrival of the Shogun Executioner, the Imperial forces went to the offensive, with their support. Soviet soldiers were crushed without mercy and even the first wave of Krukov's reinforcements were utterly erased by the Shogun Executioner. An Engineer captured the first VIP Bunker and the Soviet commander inside it surrended, forcing their men to obey the Empire's wishes.

Destruction to the Tank Base

After destroying the infantry front line base, the Imperial forces walked all the way to the War Factories and destroyed many Apocalypse Tanks. Another Engineer proceeded to capture the second VIP Bunker to capture the Soviet commander inside it and force his troops to attack the Soviet loyalists.

Destruction to the Airbase and Soviet Navy

Destruction to the Kremlin

Instead of risking a frontal assault on the Kremlin, the Psionic Decimator was activated and it destroyed the Kremlin. All that Psionic energy was unleashed to destroy everything, the Tesla Coils, the Walls, Soviet bases, buildings and finally the Kremlin.

After the Kremlin had collapsed, a large gate opened in the ground underneath, revealing a huge tunnel leading deep into Soviet soil. A single Twinblade carrying the Premier, and his most precious possession, the Time Machine, came flying out. Luckily, an anti-air group could take it out before escaping from the now flaming Moscow.

After the costly battle, the city of Moscow and the Soviet Union were no more. Some survivors, including Dr. Zelinsky, escaped west to join forces with the Allies in Amsterdam, where the FutureTech lab stands as the last remaining symbol of defiance against the will of the Empire of the Rising Sun...

The first part of the mission is holding off Soviet armor and infantry until the Shogun Executioner arrives. Capture the oil derricks and get Jet Tengus.

Once the Shogun Executioner arrives use it along with other imperial units to destroy the soviet army and level the city. Apocalypse tanks will appear and they take two strikes from the Wave force Katanas to destroy. V4s will also appear so get ready to deal with them. Do not destroy the Tesla Coils because tesla weapons heal the Executioner. Capture the VIP bunkers is not recommended due to the soviets will destroy any captured soviet structures with dreadnoughts and kirovs. The Kirovs are very dangerous towards the executioner so get rocket angels and jet tengus. After the Kremlin is destroyed use the Omega Shockwave ability of the Executioner to destroy the defenses and the Jet Tengus to shoot down the twinblade carrying the Time Machine. 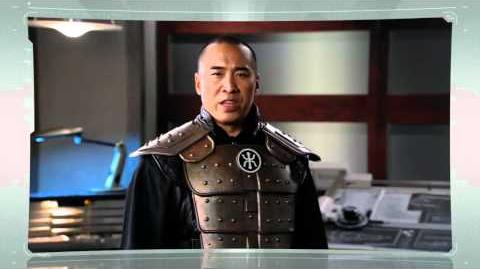