The Crusader tank was the American main battle tank during the War against the GLA.

Relatively inexpensive and easy to obtain, the Crusader mounts a 125mm[1] cannon, which is effective against tanks and other vehicles.

The Crusader's chief advantage over foreign competitors is its high tech armor protection that can be further upgraded as desired, as well as its its  main cannon which offers a punch equal to the Battlemaster Tank (without uranium shells). Like most US vehicles, drones can be assigned to serve a particular vehicle.

The Crusader has an edge over most other tanks due to its superior armor. This tank retains its usefulness even in late-game matches, being able to go head-on with all other vehicles in its same class.

However it is easily countered by anti-tank infantry and aircraft, as well as long-range units such as the GLA's Rocket Buggy, against which it has little defense. 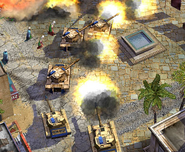 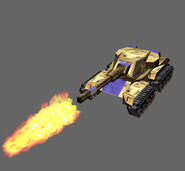 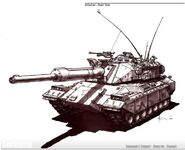 Retrieved from "https://cnc.fandom.com/wiki/Crusader_Tank?oldid=230112"
Community content is available under CC-BY-SA unless otherwise noted.