The Cryocopter is an Allied helicopter used during the War of the Three Powers and the Uprising, armed with Freeze Beams and SHRINK Weapons, though unable to directly harm targets.

When a radical Dutch energy-absorption system was coupled with a British helicopter chassis, the one-of-a-kind Cryocopter was born. The cryocopter was so one-of-a-kind, in fact, that it only recently went into mass production. Though classified as a support aircraft, unsuited for conventional anti-surface combat and lacking in any weapons in the traditional sense, it is nonetheless gaining remarkable popularity among Allied forces for its ability to neutralize enemy targets in a relatively civil, if unorthodox, way.

The cryocopter is stable and dependable as helicopters go. An ancillary benefit of its sophisticated on-board systems is a surprisingly strong fuselage, proven to be able to withstand direct fire. Of course, their durability is hardly what makes them so impressive. That credit goes primarily to the aircraft's custom cryobeam, used to draw out all heat in an area while spraying it with pure water and a burst of liquid helium, causing a flash-freeze that can encase an entire enemy tank in a block of solid ice.

Frozen targets are effectively thrust into a state of suspended animation. The effects of the freezing gradually wear off and the target snaps out of the effect all at once, with no recollection of the passage of time, as though waking from slumber. In fact, a majority of test subjects reported feeling unusually relaxed after this fugue state. Although research findings concerning the long-term effects of the freezing are inconclusive as of yet, the cryobeam has provisionally been deemed "perfectly safe" by manufacturer FutureTech Corporation. However, the Amsterdam-based defense research firm has disclosed that frozen targets do tend to become extremely brittle, such that a basic concussive impact could cause them irreparable harm. One test subject unfortunately was shattered to pieces under a routine inspection, calling FutureTech's safety claims to draw some flak. Allied military command took an interest in licensing the cryocopter at around the same time.

As if the cryobeam is not remarkable enough, stranger still is the cryocopter's "strong homogenous residual-interactive neutron kinetic" (or "S.H.R.I.N.K. beam") beam. This device safely and temporarily compresses molecular bonds in an object, in essence causing a reduction in physical size despite a conservation of mass. The long-term effects of exposure to this device are still unknown, and until they are well-understood, the Allies are treating it as a weapon. Consequently, more and more cryocopters are beginning to appear among Allied air forces, though Allied command assures the military scientists running the field diagnostics that they are unlikely to come to harm and would never be used in frontline engagements against the Soviets.

Battlefield reconnaissance has revealed at least these facts about the Cryocopter:

• Cold storage -- Cryocopters can train their cryobeams on any surface target, causing it to gradually slow and become frozen. Multiple cryobeams brought to bear on an individual target cause the frozen state to set in more quickly. Frozen targets are completely disabled and extremely vulnerable to direct attack. This ability lets even Peacekeeper troops destroy tanks with their shotguns. Targets frozen solid by the cryocopter's beam can be considered non-threats until the effects of the freezing wear off, or until they are shattered into small pieces. While this is deadly, it is considered "very humane" in the context of the modern battlefield.

• S.H.R.I.N.K. them down -- The effects of the crycocopter's S.H.R.I.N.K. beam are most unusual. Targets become unusually small, and proportionally weaker. Most targets will mouth off at you after being shrunk, for a laugh, try shrinking every unit you come across and listen to the smart remark they say. When shrunk, their energy is conserved in such a way that they seem to increase in mobility during this state, rather than slow as might be expected. This ability allows Guardian Tanks crush even Apocalypse Tanks.

• Defenseless -- The cryocopter has no conventional weapons, therefore cannot directly harm any target on its own. As a result, the Allies have publicly urged the Soviet war council to treat cryocopters as non-combatants, though they seem to refuse to comply with this request.

• Freezing facilities -- Even a war factory could eventually be frozen by a cryocopter. Frozen structures are completely disabled, and again, become extremely brittle such that even a single shotgun blast could potentially cause catastrophic harm to structural integrity.

The primary function of the Cryocopter is to hamper major threats like Apocalypse Tanks and Dreadnoughts, as well as neutralizing foes to clear the way for standard combat units. When a target is frozen, regardless of how durable it is normally, a single attack from any unit will destroy it. Mostly used in defensive methods, it can be a great way to neutralize artillery units before they are able to destroy base defenses.

Cryocopters are also a good way to neutralize a fast-moving commando in a tightly packed base. Infantry units are almost instantly frozen by the Cryo-Beam, but are unaffected by the S.H.R.I.N.K. Beam.

In "The Moon shall never have them", the final Allied mission, it was used to shrink Allied MCVs so they could establish a foothold on a neighbouring island to commence an assault on Leningrad.

In Command & Conquer: Red Alert 3: Uprising it continues to function as a valuable support unit. The Cryocopters later froze the rogue shogunate leaders Shinzo Nagama (in his own house) to allow the Allies to arrest him without any more resistance. 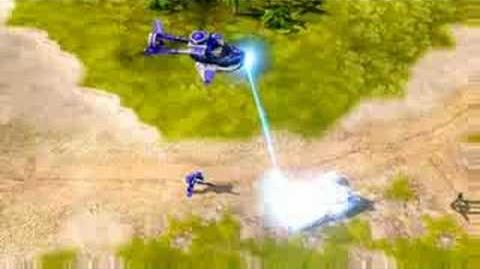 Retrieved from "https://cnc.fandom.com/wiki/Cryocopter?oldid=237556"
Community content is available under CC-BY-SA unless otherwise noted.