Defending the Docks is the second mission in the USA campaign of Command & Conquer: Generals Zero Hour. A US naval fleet assisted in the operation to destroy the GLA intending to stop the convoy trucks carrying the supplies to the warehouse.

As part of their worldwide mission to provide global aid to impoverished regions, the US began to send aid to the citizens in war-torn Somalia, where there was a heavy GLA presence. A naval fleet bombarded the docks to drive the GLA out of the harbour before the Americans established a stronghold to defend the docks. The bombardment did not completely drive out the GLA from the docks however as Colonel Burton discovered garrisoned bunkers at the main access points in and out of the docks.

The fleet renewed their bombardment and an aircraft carrier was sent to wipe out the GLA emplacements, including any nearby Stinger Sites. As the convoy trucks began arriving one by one via amphibious transport, the GLA began attacking the American base.

Each attack was repelled thanks largely due to the Raptors softening the attack forces and the new Firebase defense emplacements. Once all ten convoy trucks were docked, the Americans started to clear the fastest route to the warehouse. With assistance from the aircraft carrier and the battleships in clearing out large GLA groups, the US managed to escort most, if not all, of the relief trucks to the warehouse.

With the convoy trucks safely escorted to the warehouse, the Americans planned to eradicate Mogadishu of the local GLA cell. US satellite images and intelligence located the cell in the mountains overlooking the city. The US force advanced to the GLA base under cover of the battleships' naval bombardment, taking out massive groups of GLA tanks and defense structures along the way. Finally the Americans systematically destroyed the GLA defenders, liberating Mogadishu of the terrorists for the time being.

As the US relief supplies continued around the world, intel received news that the GLA under the leadership of Dr. Thrax was researching into a new strain of anthrax to be weaponised against the US forces in a secret lab in Mt. Elbrus.

As the Supply Trucks are arriving, establish a defensive position in the bridges and the hills. Colonel Burton must go upwards to a hillside GLA base. Make the Rangers capture the Tech Repair Bay, Reinforcement Pad in the hills and the Hospital near the warehouse. Use the Battleships to eliminate the GLA guarding the warehouse. Then use the Aircraft Carrier to soften GLA attackers and their defenses near the warehouse. There are also UN caches in the docks. Get it for extra cash. When the 10 Supply Trucks are ready, secure the area and soften GLA attacks with Destroyers and Aircraft Carrier until the trucks enter the warehouse.

When the Construction Dozer arrives, build a Command Center first then build a base. Capture the Oil Derricks and Oil Refinery near the GLA base. Use the chance to build a force capable of wiping out the GLA base in the hillsides. 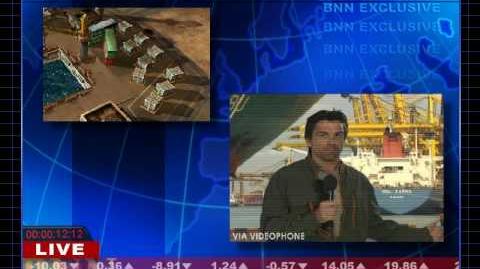