The Desolator is an infamous Iraqi infantry unit used during Third World War and the Psychic Dominator Disaster.

Created by Soviet-aligned Iraq these voluntary warriors go through tests that would kill them if it wasn't for their radiation suits. Each soldier is equipped with a nuclear battle suit[1] and a rad-cannon. He is quite fast and speaks in a raspy, tired voice.

Desolators were also the only infantry unit apart from the Cosmonauts to be sent to the Moon.

While they are a potent anti-infantry unit with their rad cannon's primary mode of fire (a concentrated radiation beam melting down enemy soldiers), their true power lies in the way they can deny an area to the enemy by irradiating the surface, making passing through it lethal to infantry and damaging to light vehicles. Their radiation field can penetrate water, making them capable of damaging submarines and revealing them. They are most effective at cutting off important choke points, such as passes, valleys, and even bridges. They were nearly matchless against any type of infantry, save for ones armed with long-ranged anti-infantry weaponry and flying infantry (like Rocketeers and Cosmonauts). Their suit design clearly do not have incorporated comfortability values, so they cannot open any of their outfit for themselves. This feature helps them greatly to survive in extreme conditions. As a result, the Desolator is only one of two types of infantry units authorized for the Moon assigment.

However, they have to remain immobile while deploying their cannon and could be easily taken out by enemy Snipers, heavier vehicles or airborne units, such as Rocketeers, Harriers or Nighthawks. Their weapons were also completely useless against robotic units such as Terror drones and Robot tanks.

It is useful to keep a few Desolators around a Soviet base, as an effective counter against a Nighthawk rush carrying Engineers or Navy Seals into the heart of a base. If you time it just right, you can irradiate the landing zone before the Seals arrive, causing them to instantly die the moment they leave the transport. If you do this too late, the Seals will kill the Desolator; the Nighthawk itself might also pick off the Desolator if there is absolutely no flak defense. Nonetheless, the Desolator is the Soviets' only equivalent to a "ranged sniper" unit, capable of picking off stray Engineers that try to breach the base. Desolator is also a favorable unit to counter paradrop, provided they can be transported fast enough to the drop zone (and, if used, the transportation unit can get out quickly). Desolator cannot harm infantry that are garrisoned in a building. British Snipers are not an effective counter against a large number of Desolators, such as 5 or more, because the Desolators' long range meant death for them. In large numbers, desolators can create a contamination zone more deadly than a nuclear missiles, and destroy nearly anything that comes through in a matter of moments. Strangely, a veteran Desolator can withstand a nuke attack.

Desolators can be combined with captured Allied IFV's to make "poor man's Demolition Trucks"; essentially a smaller version of the Libyan Demolition Truck's blast damage and radius, but which will result in radioactive fallout, damaging infantry that passes within (only in Yuri's Revenge - in RA2 he has an upgraded rad-cannon). The combination may still have other values as desolator can still shoot on their primary mode only, even affecting IFV promotion tally from the kills. However destruction of IFV will still instantly kill any infantry inside, desolator included. Allied commanders are normally wary to have their air support pick off slow moving Desolators before they can reach the heart of massed Allied infantry formations, but incredibly fast IFVs can quickly deliver a radioactive blast to their center.

They can also be used to cripple Yuri's economy since Slaves are very vulnerable to radiation, yet it takes time to have the irradiated ground returning to normal even if the Desolator is killed.

Originally, the unit was called Gamma Legion and used a shoulder-mounted Gamma cannon.

After the Psychic Dominator Disaster, a secret plan was implemented to bring them back to life. Seen during the Uprising, the new Desolators were more machine than man. Now with the ability to corrode armor, a small group could take on any threat on the battlefield. They are a far cry from the War of the Three Powers juggernauts. 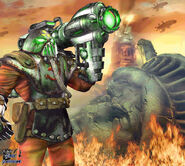 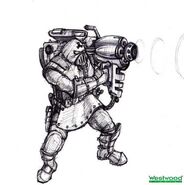 Manual render with no text

Icon with Chinese text
RA2 Desolator Textless Icons.png
Icon with no text
Add an image to this gallery

Retrieved from "https://cnc.fandom.com/wiki/Desolator_(Red_Alert_2)?oldid=192034"
Community content is available under CC-BY-SA unless otherwise noted.