They are terminally ill patients, spirited away from Soviet hospitals in Omsk, implanted with extensive cybernetic enhancements and placed into monstrous suits of bionically-powered armour, with no recollection of their previous lives thanks to the memory wipe.

Their weapons and armour were developed as the Soviet Union was crumbling down, and the Ministry of Experimental Science desperately sought new means to defend Mother Russia. The handful that did not defect or desert continued their research, eventually creating the Desolator Trooper Programme (DTP), which bred the most horrifying frontline trooper ever to corrupt the face of the Earth (whose very existence violated 71 International Provisions of Appropriate Military Conduct). In fact, the creators of Desolator troopers were also their first victims.

The Desolators take their name from the toxins they employ as weapons. Quickly evaporating and leaving little traces behind, they are impossible to analyze, but rumors abound that they are a by product of Soviet super-reactors. They were used on the frontlines, in the form of Desolator airstrikes, but only in the closing stages of the war did the scientists find a way to transport them in a more portable fashion.

The average lifespan of a Desolator trooper is about a year or two (or until their life support dies), during which they require no sleep nor food due to being cybernetically and surgically augmented.[1]

Deployed during Operation Raid on Lost Castle, the Desolator troopers were part of the Commander's task force that was raiding the FutureTech base. During Yuriko Omega's insurrection, she uncovered a data file from a FutureTech prison camp which revealed that their scientists were struggling to get a captured Desolator trooper outside his suit without killing him.

Being an offshoot of Tesla suit technology, the Desolator shares many of its strengths and weaknesses, including cladding that is uncrushable by vehicles (albeit vulnerable to shurikens, dogs and bears), and a "fatal attraction" to the Magnetic Satellite. There are two modes on the Desolator's menu - the first is a sprayed concoction that kills infantry directly, which can also clear garrisons (but not ones inside vehicles). The formula is similar to the one used in Desolator Airstrike in terms of damage and appearance. The second concoction is an all-new formula fired in balls that will poison and corrode armour, allowing the sprayed chemical to be used on it. When in use, this formula can help other infantry units to write off heavily armoured vehicles and structures. As chemicals, both weapons have an area of effect, defiling a position before being vapourised or absorbed slowly. Desolators can garrison buildings and can also enter vehicles. They are best suited with groups of other infantry types (beware of their chemical spill). They are vulnerable to almost all anti-infantry weapons and aerial attacks.

Battlefield reconnaissance has revealed at least these facts about the Desolator Trooper:

• The aptly-named Deathspray -- Desolator Troopers fight using dual pressurized hoses that project streams of vile, toxic fluids that can strip flesh from bone almost instantly and cause the bone to disintegrate moments later. Thus, this unconventional weapon is considered to be far more dangerous to flesh-and-blood targets than bullets or bombs.

• The armor-melting Splattershot Gun -- Desolators also have means of dealing with armored vehicles. The corrosive globs fired from the Desolator's Splattershot Gun not only clog up mechanical parts (thereby reducing top speeds), but serve as a catalyst for the Deathspray. In essence, once a vehicle is "splattered", it becomes as vulnerable to the Deathspray as a portly fellow at the beach.

• Nearly immune to injury -- A happy side-effect of the Desolator Trooper's resistance to all kinds of different toxins is an extremely high resistance to general pain and physical injury. It is not the case that these men feel no pain; they have simply grown used to experiencing constant, negative sensation.

• A costly experiment -- After the war, the Ministry of Experimental Science desperately spent most of its remaining funds developing the Desolator Trooper's armor and weaponry, and though the results proved effective, if profane, the costs associated with these forces make them quite uncommon. 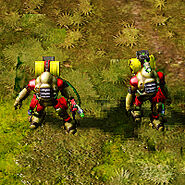 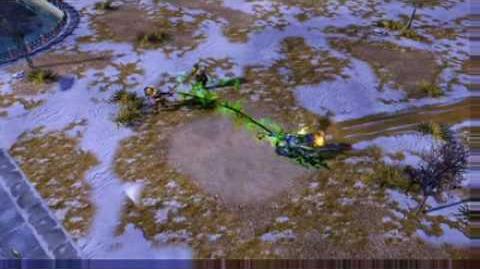 Retrieved from "https://cnc.fandom.com/wiki/Desolator_(Uprising)?oldid=227287"
Community content is available under CC-BY-SA unless otherwise noted.