During the Third World War, the Allies developed a new version of the Destroyer. This new Destroyer was greatly different from its predecessor: it was armed with a cannon for short-range defense against surface targets and instead of the old Depth charges it used Ospreys to engage submarines.

The Destroyer was the main Allied warship and was widely deployed on every Allied naval base. It was not too expensive and could be deployed in large groups. Their cannon was effective against other ships, like Dreadnoughts, and the Ospreys were effective against submarines. They were excellent in defending Aircraft carriers against Soviet and Yuri submarines, and they were also effective in attacking coast-based enemies, clearing the way for Amphibious transports.

However, they also had a number of weaknesses: firstly, Soviet submarines in numbers could take out Destroyers because they had a faster reload time. Ospreys were also very vulnerable to Sea Scorpions that could take them out in seconds, leaving Destroyers vulnerable against submarines. Finally, they weren't able to use their cannon on submarines even if these emerged from underwater, while units such as the Grizzly tank were able to attack emerged submarines. However, Allied commanders could always force-fire the destroyer's cannon near submerged submarines, greatly damaging them.

Important operations in which Destroyers took part included the defense of the coasts of Florida, where however the Allied navy was defeated by the Soviets, the liberation of Chicago, and a number of other operations.

Allied Destroyer cannons are effective against both ships, vehicles, infantry and buildings, but have a short range. If an Osprey is lost, it is automatically replaced at no cost after a period of time. If the Destroyer is lost, its child Osprey will be lost as well; an airborne Osprey will crash even if a nearby destroyer needs a replacement.

When Elite, the Destroyer's cannon would have improved dramatically, to the point the ship could destroy structures from safe distances very quickly with its cannon. Its armor has improved and it gains the ability to self-heal, essentially becoming a small battleship.

It is not known to operate after the events of the Psychic Dominator Disaster. After Cherdenko's to 1927, the Destroyer was replaced by Assault Destroyer's in the War of the Three Powers.

The Destroyer is voiced by Gregg Berger who also voiced the Harrier and the installer voiceover. 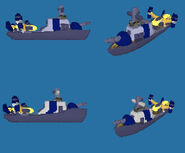 Retrieved from "https://cnc.fandom.com/wiki/Destroyer_(Red_Alert_2)?oldid=243131"
Community content is available under CC-BY-SA unless otherwise noted.