The Flame Tank, nicknamed "Devil's Tongue" (also known as the "Pyradon" flame tank), is an experimental multi-purpose weapon developed by the Brotherhood of Nod by the time of the First Tiberium War. The first generation of the Nod flame tank series, in terms of torturous firepower, cannot even begin to be compared with merely "controversial".

In the waning days of the First Tiberium War in 2001, the Brotherhood of Nod's elite strike force, the Black Hand, was known to possess their own variation.

The Devil's Tongue carries twin fixed flame cannons joined to two large pressurized napalm tanks on its back. The driver's canopy is located between the giant flamethrowers. The whole vehicle rests on a light tracked chassis.

The resulting tank is a fast, versatile and nightmarish weapon, dangerous to infantry and buildings alike, as shown in the test footage recorded during the first Tiberium War and archived news articles below - but also lightly armoured and highly volatile, taking everything with it or horribly burn in the blast radius when destroyed, including friendlies. Results are hot indeed.

Although the Flame Tank was truly a weapon of shock value and participated in the defense of the Brotherhood of Nod's base of operations, the Temple of Nod in Sarajevo, the destruction of the Temple and the Flame Tanks showed that it was all but a futile gesture. By the Second Tiberium War, it gave way for the development of an advanced, subterranean model: the Devil's Tongue Subterranean Flame Tank.

This weapon platform gives Nod a near-perfect solution against GDI patrols consisted of infantry and light vehicles. Their armour is quite resilient against small arms. The flame is limited in range, though, and the unit must close in before an effective burst can be fired. Their armour can still hold against a medium tank ambush, but the Flame tank will lose a one-on-one fight.

The German codename of the Nod Flame Tank is "Flame of Enlightenment" (ger. Flamme der Erleuchtung). 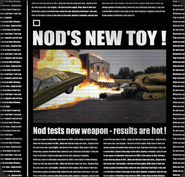 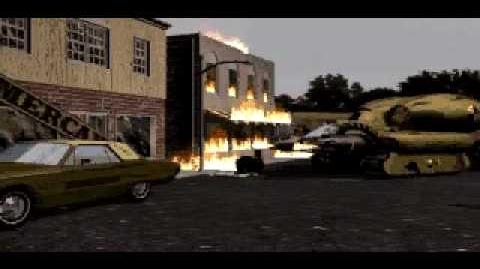 Retrieved from "https://cnc.fandom.com/wiki/Devil%27s_Tongue_flame_tank?oldid=242276"
Community content is available under CC-BY-SA unless otherwise noted.