The Disruption Tower is a Nod support structure in Tiberium Wars.

This powerful device houses a stealth generator in a circular structure in the middle, while three stealth field emitters cloak all allied units and buildings in a moderate radius.

They have a decent cloaking field, though they can never cloak themselves or other Disruption Towers. This can prove deadly to the user, as it can actually act as a marker for enemies to launch their support powers at. On the other hand, the user can place dummy fields to deceive their enemies and have them waste their support powers.

However, enemies with stealth detectors can reveal nearby cloaked unit/s and/or structures. Some special support or intelligence powers also temporarily reveal either the entire enemy base, or certain structures. These include GDI's Radar scan, Black Hand's Power signature scan, and the Scrin's Tiberium vibration scan.

Despite these weaknesses, Disruption Towers placed a good distance behind a Nod commander's base defenses can allow the defenses to effectively counter enemy artillery units, as the enemy units will have to close distance to take out the Disruption Tower, but will be destroyed by the base defenses before they can do so. When used as an effective range boost for allied base defense structures in this manner, they are usually well worth their price.

It is also noteworthy that, unlike the Cloaking Field support power, Venom aircraft within the range of an allied Disruption Tower will also be cloaked (i.e. not just land units and structures). This makes them far more effective at providing air cover for friendly bases.

Nod's stealth technologies seems to have gone backwards compare with those deployed in Second Tiberium War and Firestorm Crisis. Stealth Generator introduced in Tiberian Sun can hide itself, and if placed carefully, several of them can make an entire Nod base completely invisible unless anti-stealth detectors are deployed. This is likely due to Nod losing most of its technology following its defeat in TWII and having to recover its own stealth technology from the GDI. 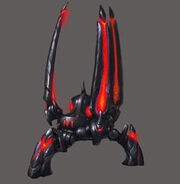 Concept art
Add an image to this gallery
Retrieved from "https://cnc.fandom.com/wiki/Disruption_tower_(Tiberium_Wars)?oldid=215363"
Community content is available under CC-BY-SA unless otherwise noted.