The Disruptor was an advanced vehicle developed by the Global Defense Initiative during the Second Tiberium War.

For some time, GDI had been developing a mobile platform capable of projecting sonic energy for its use as a weapon. This eventually led to the creation of the Disruptor with a prototype being developed by the time of the Second Tiberium War. Once Kane had emerged from his supposed death of the First Tiberium War, he charged the Brotherhood of Nod to acquire the crystals used in the Disruptor design. Nod managed to capture these crystals from GDI's Hammerfest Base. However, a task force led by Michael McNeil managed to prevent the crystal from being taken by Nod forces in the following mission.

After the Firestorm Crisis, as with many of GDI's experimental technologies, the production of the Disruptor ceased and it was phased out of the assembly line as a military vehicle. However, many of the elements of the design such as the usage of harmonic resonance was greatly expanded upon and the use of the Disruptor helped pioneer GDI's research into that field of science. This not only led to the development of powerful stationary sonic emitters but also more mobile versions of the technology such as the Shatterers and Zone Shatterers which saw deployment in the Third Tiberium War.

The disruptor was a GDI unit that fired a powerful turreted harmonic resonance cannon. The technology for the Disruptor units developed by the GDI centers around special sonic crystals. These, when under power and placed in special equipment, would generate a highly destructive wave of sonic energy. The might of these waves would be harnessed by GDI, who, by using specially designed Disruptor turrets, would amplify the waves with a large, reflective dish and with the same dish project them against foes and installations on the battlefield. Due to the high level of technology involved, Disruptors require a tech centre for construction and are relatively expensive to build (much more than a Titan, for example).

The wave was capable of destroying anything in its path by inducing vibrations that would eventually shatter the target. GDI commanders appreciated its great power, even though it only had moderate range. It was particularly effective against buildings-and also CABAL's cyborg forces. Care must be observed when using Disruptors as the sonic beam will damage friendly and enemy units in its path. Fortunately, friendly Disruptors are unaffected. It is possible for the Disruptor to destroy several buildings with a single beam, as the weapon can penetrate buildings to reach other buildings, doing damage to both.

Due to time constraints, the vehicle the turret was mounted upon was a simple treaded vehicle, similar to the ones used for mobile construction vehicles, making it slow. However, as a tradeoff for the lower profile and heavy treads, the Disruptor is heavily armoured, making it extremely durable.

The Disruptor is reasonably heavily armoured, while its beam has the same effect as a railgun, as the beam can bypass its target in a line, damaging other units in front of the beam, dealing damage over time. The Disruptor can also trigger the detonation of blue Tiberium fields, making the crossing of blue Tiberium fields guarded by Disruptors a fearsome prospect. However, the Disruptor has a slow firing speed and short range (about as far as a Wolverine's miniguns), and has no anti-air defense at all - a Banshee or even a Harpy can chew through the Disruptor's armour.

Due to their expense, short range, and lack of anti-air capability, these units should be deployed with tact. They are to be used as supporting units to flank the enemy that has already engaged the more heavily armoured (and cheaper) Titan walker.

The advantage to this unit are the very high amounts of damage it deals in a short period of time. No matter what the armour type, the Disruptor will cause significant damage. The damage is multiplied the longer the target is exposed to the Disruption beam, so keeping these units alive long enough to deal damage is a priority.

The game could crash if a Disruptor's ray would try to extend off-screen, such as when facing a building that is being destroyed on the edge of the map. HyperPatch fixes this. 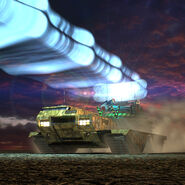 Magazine render
Add an image to this gallery 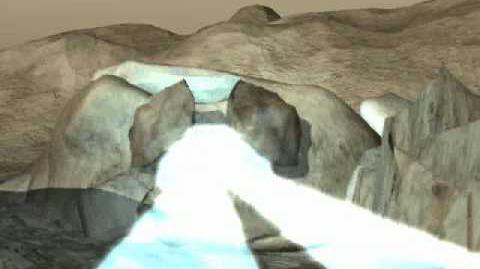 C&C Tiberian Sun - Hide & Seek
In a cinematic
Add an image to this gallery
Retrieved from "https://cnc.fandom.com/wiki/Disruptor?oldid=227565"
Community content is available under CC-BY-SA unless otherwise noted.