Commander of the Allied forces

Douglas Hill is an American soldier who appears in Command & Conquer: Red Alert 3.

He is a veteran of the battlefield, disgruntled with the way the war is being handled. Hill took charge of the Allied Forces to show the troops how it's done. He is enormously hateful towards the Soviets and the Japanese.

Commander Hill is a former war hero who volunteered to come out of retirement to train the next generation of Allied Peacekeepers and to help establish tough policies for a post-war Empire of the Rising Sun.

While some military pundits claim Commander Hill is past his prime, none who have seen his tank platoons in action share this point of view. Commander Douglas Hill is reputed for moralizing, gloating and insulting both his allies and foes. The Tank Commander is somewhat a conservative old school war veteran.

Hill appears only in the Commanders Challenges.

The first commander faced in the challenges where he is in the mission "Dead Meat". After seeing the Commander, he says that it looks like his opponent is a trainee who could use some pointers. Once he introduces himself, he tells the Commander that he is going to teach a lesson about defeat. When defeated, he shouts to the Commander that he admits he may have a few good moves for a whelp.

He next appears in "High Water Mark" where he has led his forces in an invasion of Shinzo Nagama's island. After hearing a message from him, Hill says that war was not about who was right, but was about who was still standing in the end. After being beaten in battle, he protests saying he wished he would have more tanks for the next time.

In the mission "Crate and Red Barrel" he fights the Commander again and tells him that the red barrels on the map are full of candy and that his opponent should crack them open. When defeated, he admits that maybe he lied about the barrel and that the Commander wins this time.

In "Future Warfare", Hill works with his fellow Allied commanders Giles Price and Lydia Winters to bring down their foe. However, once again, the three of them are defeated. Hill claims that the Commander proved himself to him. However, the Commander did not search to be approved and coldly destroyed Hill's base to the last man.

Later, in "Are You Experienced", he says that he hopes that the Commander has been treating his veteran units well as they are all that he will have in this battle. He also states that he knows his forces are the best of the best. After he is beaten and defeated, he yells at the Commander to wipe that smirk of his face "Private" and that the fight between the two of them was not over.

In "No Match for the Guardian", Hill is glad to have his tanks and gloatingly mentions that he wrote the book on tank tactics. However, empty words once again, Hill is crushed and in the end he says that maybe the Commander can have a future.

He also returns in a "Be Quick Or Be Dead" where Oleg, Takara and himself all cowardly assault, in a three against one match, the Future Tech Commander. He gloats that the Commander is having too much pressure. He is defeated and shamed, shouting "You cocky little bastard."

Commander Douglas Hill returns to many other challenges with the same result: failure to eliminate the Commander. Despite his best efforts, Hill is incapable of terminating his arch-nemesis and hypothetically falls in battle. Finally, the Tank Commander who wanted to go back on his feet to kick some ass was shunned with utter defeats and probably retired for good. 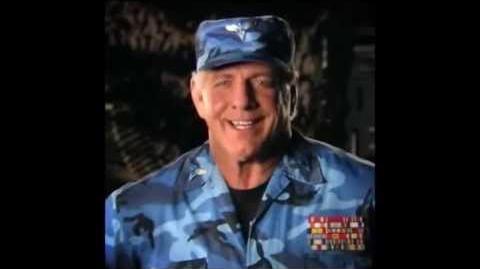 He is played by Professional Wrestler "The Nature Boy" Ric Flair, who participated in promotional fights against a bear.

Although Ric Flair claimed that Commander Hill would kick ass in every one of the Commander's Challenges his character is defeated.

Retrieved from "https://cnc.fandom.com/wiki/Douglas_Hill?oldid=204048"
Community content is available under CC-BY-SA unless otherwise noted.