'Dr. Thrax' is the pseudonym of a key leader and scientist of the terrorist group known as the Global Liberation Army.

Little is known about the GLA associate codenamed "Dr. Thrax." While background intelligence indicates that he received training as an immunologist in Jordan (allegedly getting his degree from a mail-ordered college), he left academics in 1995 and disappeared into a GLA-controlled ghetto in Cairo. For the past twenty years, he has produced chemical and biological weapons for terrorist organizations across the globe, including the GLA.[1]

Recent eavesdropping on cell phone traffic indicates that Dr. Thrax has become more involved in day-to-day operations of the GLA. He has scattered labs across Asia and the Middle East, where low-cost WMDs are produced and distributed to local terrorist cells. A cautious and scientific personality, Dr. Thrax never sleeps in the same bed two nights in a row and undergoes frequent cosmetic surgery to alter his appearance.[1]

There is overwhelming evidence that from this point on Dr. Thrax busily produced ever-more lethal biological and chemical weapons, which he sold to various terrorist organisations, including the GLA.

War Against the GLA

During the First GLA War, Dr. Thrax was identified as a key leader in the GLA by the US military. When a new chemical weapon was used in a warhead by the GLA and launched from Baikonur Cosmodrome against an American naval base in northern Europe, the US started to hunt down the scientist. Documents obtained from US operations in Somalia and Mt Elbrus revealed that Thrax had massive influence in the terrorist organisation. Having had his funding cut off by the Americans in Operation: Black Gold, Thrax fought a fight to the death against them in the classified Area 52, where his main stronghold was located. Thrax had threatened to launch four warheads against key metropolitan centres but the US army managed to thwart his plans (with help from GLA defectors who were unhinged by Thrax's insanity). Thrax's base was destroyed by the US forces, and it was assumed that the doctor had perished in the battle. His disappearance had led to a short internal power struggle within the GLA after the battle. 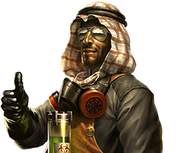 Thrax during the Second GLA War

Rumors continue to swirl around the mysterious Chemical Weapons expert known only as "Dr. Thrax" - his origins mysterious, how he survived the collapse of the GLA following their first failed uprising even more so. All that can be ascertained is that Thrax did indeed survive, has returned to prominence within the terrorist organization, and is - if it can be considered possible - a more deeply disturbed individual than ever before.

EU intelligence indicates that Thrax continues to conduct chemical weapons experiments in labs scattered across the globe, leaving a trail of devastating disease and chemical torture in his wake. Whispers from inside the GLA suggest that Dr. Thrax has been physically ravaged by his experiments - organs failing, massive chemical scarring on his legs and torso, hands so damaged he must wear gloves at all times lest they require amputation - but the few who know the entirety of the truth are too terrified to share it.