The Dragon Tank is a specialized flamethrower tank that was used by the Chinese during the war against the GLA.

The Dragon Tank can also spray flames back and forth in a 180 degree arc, making it an effective area denial weapon, albeit with a relatively short range. While doing so, it cannot fire normally upon approaching enemies. Nevertheless, the wall, once fully formed, is a daunting and deadly barrier to infantry and light vehicles alike. The wall can also be used to destroy multiple structures at a time.

The Dragon Tank excels at eliminating infantry whether in the open or garrisoned in buildings. The Fire Wall ability can render areas impassable to enemy infantry, and is especially useful for screening a position against Terrorist attacks. Due to fireproof armor, Dragon Tanks are immune to the flames of friendly (and rogue) Dragon Tanks. They are also deadly against buildings, especially when upgraded with Black Napalm. Use the fire wall ability to burn structures down faster than regular attacks.

Used in conjunction with other tanks, such as the Battlemaster or Gatling Tank, it can create an impassable roadblock to enemy tanks and infantry. Several groups can establish a perimeter for other units to move in, sweeping across the map and cornering the enemy in their own base. PAY ATTENTION to your ground units and buildings nearby as the wall of fire will burn everything on its path. The fire wall also require a short time before maximum damage is achieved.

The Dragon Tank is surprisingly resilient against missiles from infantry-carried launchers, but otherwise was quite thinly armored, and lacks any anti-air protection. Their short range also makes means that Dragon tanks crews will take significant casualties in any battle. Against regular tanks it is next to useless unless used in large numbers. It also causes terrorists to detonate their bombs when hit by it, and coupled with its low range, the terrorist's bomb may damage itself and nearby friendly units. making them not effective for attacking hordes of charging terrorists. 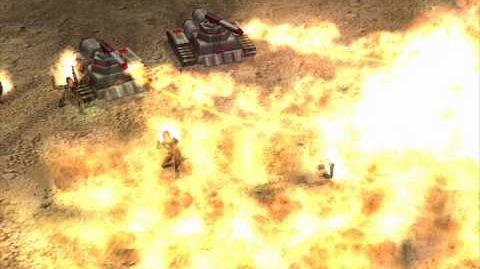 Retrieved from "https://cnc.fandom.com/wiki/Dragon_tank_(Generals_1)?oldid=230943"
Community content is available under CC-BY-SA unless otherwise noted.