Highly compact, it utilizes canisters of compressed gas as ammunition that can be quickly changed when one ran out. As it's fuel canisters were no longer carried on the back, this reduced the potential danger of explosion by a large degree.

While limited in range, the flamethrower was an extremely powerful weapon if the flames could reach the target. It also inflicted burn damage, meaning ones caught in the blast would suffer damage from aftermath burns. They could easily cause mass disarray in crowds of infantry as the fire obscured almost anything.

Although it was meant to be an anti-personnel weapon, it was also quite effective against vehicles, provided there were more than one flame trooper attacking the designated vehicle. Unlike its Tiberian Dawn counterpart, it did meager damage against buildings unless, once again, the building was being attacked by numerous flame soldiers or from the inside.

While intimidating, the weapon posed almost no threat against enemies that were out of reach, and the wielder would be easily terminated with longer-ranged weaponry. 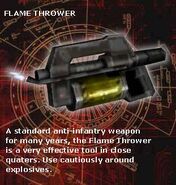 Dragonfly flamethrower in Renegade database
Add an image to this gallery

Retrieved from "https://cnc.fandom.com/wiki/Dragonfly_flamethrower?oldid=150069"
Community content is available under CC-BY-SA unless otherwise noted.