The Barracks is responsible for the production of the European Union's basic infantry. It was expected to appear in Command & Conquer.

A European barracks was seen in the EU base in the first teaser, along with a European War Factory and a building that under construction by several excavators. Though in the Gamescom 2013 Livestream, it is revealed that the structure seen was actually a Spec Ops Facility. 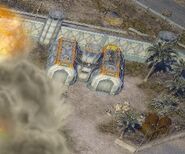 EU Barracks
Add an image to this gallery

Retrieved from "https://cnc.fandom.com/wiki/EU_barracks?oldid=225647"
Community content is available under CC-BY-SA unless otherwise noted.