Emperor Yoshiro of Japan is the long time ruler of the Empire of the Rising Sun, and presides over the Empire at the zenith of its power as one of the three superpowers of Command & Conquer: Red Alert 3. He is cherished as a living god by his people.

Emperor Yoshiro is a traditionalist who strictly follows the code of Bushido, the samurai way of the warrior. He fundamentally believes that the Empire's destiny is to rule the entire world, that he was Emperor by divine right and that his fate was preordained. He rarely shows emotion and often spoke in a seemingly wise tone.

He holds the ideologies of the other two world powers in contempt, regarding them as barbaric compared to the perceived superiority of Japanese culture and ideals.

The Emperor knew the value of morale and propaganda, and believed that a War is won by winning hearts and souls of his enemies and/or breaking their will to fight. Thus, during the invasion of the Soviet Union he carefully chose to strike at symbolic targets such as monuments and statues. He also ordered an invasion of California to seize American media centers to broadcast Imperial propaganda across the United States. This contrasts with the approach of his son, Prince Tatsu, who advocated a more straightforward military doctrine of attacking important military targets and not allowing the enemy the option of surrender.

In the Allied perspective of the war, Yoshiro saw both Tanya and Natasha teaming up to defeat his three Shogunate generals, Shinzo, Naomi and Kenji, and told them that "the river of destiny" cannot be stopped - but the deadly duo proved him otherwise. After operation Forever Sets the Sun, and the destruction of the Shogunate Headquarters, he is possibly captured, or killed. According to the lore, it is assumed that the emperor has died of old age or wounded.

Having repulsed the initial Imperial assault in the Soviet Union, the Soviets launched an attack on the Imperial Palace at Mount Fuji to assassinate Yoshiro. The initial assault was nearly entirely wiped out. The sole survivors, a conscript and a war bear, managed to infiltrate the Palace and assasinate the Emperor. However, it turns out the "Emperor" was only a robotic decoy. Later, a heavily reinforced assault broke into the Palace and successfully destroyed the Palace. Yoshiro was forced to confront the invaders in a personalized King Oni. The Emperor was killed in combat; his walker destroyed; much to his son's horror as he asks the Soviets if they have any honor for what they did to him. The Empire of the Rising Sun quickly capitulated afterwards without its leader.

In the Rising Sun perspective of WWIII, he commands the Shogun to slowly attack the Soviets and Allies, mostly by using propaganda in order to wear down their spirits. He, being of moral and spiritual beliefs, was convinced that the downfall of their foes will come first from spiritual breakdown. He's shown care for his homeland, since he called for the defense to an invasion force by the Allies as opposed to continuing to launch assaults against the Allies and Soviets as Tatsu advised.

Yoshiro is a fatalist and a firm believer of the Empire's sacred mission to bring unity to the world. When Dr. Zelinsky contacts the Allies and informs them that the Soviet leadership returned in time and thus violated the space-time continuum, Yoshiro becomes disenfranchised. The facts clearly demonstrating that the Empire was not destined to become enemies with the barbarians after all (at least not the Allies). At the same moment, the Allied High Command and the Soviet Union launched a full scale attack on Yokohama harbor which affected greatly the Emperor.

He resigns after he realizes his failure, and having doubts about his destiny... for what is the point of the Divine Destiny and their conquests so far if Man can manipulate space/time as he pleases? The Ruler of Japan abdicates in favor of Tatsu, symbolically giving his son the Katana that the Japanese leader carries with him with a request to not let the Empire fall to the Allied-Soviet alliance. He overcomes his guilt, agreeing with Tatsu about the Empire creating their own destiny. During the final destruction of the Soviet leadership in Moscow, he is seen giving the Shogun and Kenji the order to destroy the Time-Machine, resulting in the termination of Premier Cherdenko and General Krukov. During the siege of Amsterdam, he grants the Shogun and Shinzo a full battalion of Elite King Onis alongside Rocket Angels and Mecha Tengu to facilitate the final destruction of the Future Tech HQ.

He is last seen in the Empire's victory celebration, giving the Commander the title of Supreme Shogun.

Yoshiro did not survive the defeat of his Empire, and was buried in a tomb on Oki Island. A post-war assault on the tomb by the Soviets was repulsed with the aid of the Steel Ronins guarding the tomb as penance. 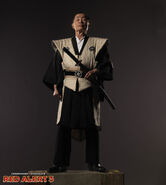 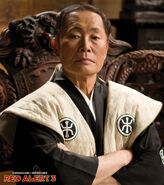 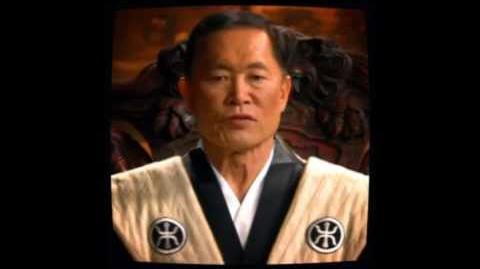 Retrieved from "https://cnc.fandom.com/wiki/Emperor_Yoshiro?oldid=231561"
Community content is available under CC-BY-SA unless otherwise noted.