GD45 pistol (not used in the game)

An engineer is a member of GDI's Corps of Engineers, tasked with capturing and repairing structures in Tiberium Wars and Kane's Wrath. Their Nod equivalent is the Saboteur, and their Scrin equivalent is the Assimilator.

Though excellent at battlefield maintenance, engineers are not well suited to combat. Trained in structural engineering and sabotage, Engineers are non-combatant infantry capable of performing a number of duties. Most notably, these infantry units almost instantly take over enemy structures. Although Engineers possess decent armour, they are normally unarmed, relying on Commanders to clear the battlefield for them, or more likely, to be transported in Armoured Personnel Carriers, or in helicopters.

A typical engineer wears light combat armour (about as protective as a paper sheet) and a gas mask, carries a suitcase with all the necessary tools and control codes for his job as well as GD45 pistols for self defence, though its more of a morale improving item rather than a proper combat weapon.

Information gleaned from the Tacitus gave GDI some basic information about the Scrin. Although lacking information relating to their tactics and strategies, the information about the Scrin's basic engineering mechanism (including command and control) became accessible. By the later stages of the Third Tiberium War, GDI had trained their engineers in the use of Scrin technology.This decision has proven decisive as GDI engineers have minor difficulties in capturing Scrin structures and walkers.

Engineers can prove to be a powerful unit, even though they lack weapons. They have three primary uses in the battlefield: capturing enemy structures, repairing allied structures, and capturing or reclaiming walker husks. They unfortunately cannot repair civilian structures anymore, but they can still garrison inside them for additional safety.

Engineers should be among the first thing a player builds, as capturing neutral structures early on can even the tide for later. Engineers generally should accompany walker divisions so that their husks can be reclaimed as soon as they are downed; players often do anything they can to avoid having their investment on walkers turn against them.

GDI Engineers have a particularly nasty combination of combining with an APC for what is known as the "APC-Engineer rush". Players will try loading engineers into an APC, then charge them at the enemy base. As soon as an APC parks right next to a key structure, the engineer unloads and takes the building. This vastly improves their survivability, but can be countered by selling the building, which produces a squad(or swarm, for the Scrin's case) of basic infantry which kills the engineer or putting up anti-vehicle defences.

As of Kane's Wrath, however, Engineers take several seconds to claim a structure, making the APC-Engineer rush a less viable tactic. 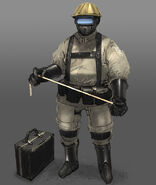 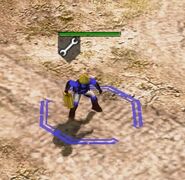 Close up
Add an image to this gallery

Retrieved from "https://cnc.fandom.com/wiki/Engineer_(Tiberium_Wars)?oldid=230968"
Community content is available under CC-BY-SA unless otherwise noted.