The man portable Obelisk of Light module, the Firefly laser rifle, is one of the many technological marvels Nod R&D corps have created in the heat of the First Tiberium War.

Designed primarily for Black Hand operatives, it features a bullpup design in a resistant, reliable package. However the weapon lacks advanced optics, forcing the user to rely on iron sights entirely.

A Firefly is charged with special batteries and is capable of converting energy into light, which is then amplified and projected forward through a red focusing crystal located underneath the front of the weapon. Each battery is charged for a hundred shots and can be quickly reloaded. The laser beam is capable of piercing all but the thickest body, even penetrating armor plating.

The weapon is semiautomatic, to improve cooling and prevent overheating. A development of the weapon is the Tarantula laser chaingun. Due to cost and complex construction, it is not issued to regular Nod troops.

Standard issue weapon of the Black Hand stealth soldiers, both in single player and multiplayer, the Firefly is a versatile weapon against nearly all enemies. Lore-wise, it was created on the basis of Nod's Obelisk of Light technology, and while not nearly as powerful, it was still one of the best weapons available to the Brotherhood in its time.

The weapon has a long range of fire (although not nearly as long as the sniper rifle), deals 10 damage per shot (plus 10 of burn damage, totalling at 20), hits instantly and has a high rate of fire, firing 5 rounds per second.

However, the power comes at a cost, since it has a very, very loud and distinct sound and the Black Hands wielding it tend to have the shortest life expectancy on the field (but so do GDI riflemen who stumble upon them). Skilled riflemen have been known to outgun one of these assassins with superior accuracy and speed. The weapon's firing rate was also slightly lower than the average automatic weapon, meaning Black Hands with the rifle had to rely on superior accuracy to win the day.

If one plans to infiltrate the enemy base as a Stealth Black Hand, it is recommended that they refrain from overusing the Laser Rifle unless discovered.

The laser rifle changed a bit in the development phase - while originally it had two emitters that focused lasers, that bit was changed, and instead of two emitters, a single red focusing crystal was placed under the barrel, showing the relation of the weapon to the Obelisk of Light. 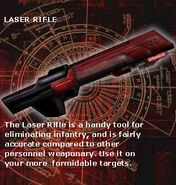 Firefly laser rifle in Renegade database
Add an image to this gallery
Retrieved from "https://cnc.fandom.com/wiki/Firefly_laser_rifle?oldid=215546"
Community content is available under CC-BY-SA unless otherwise noted.