The Firestorm Generator serves as the central power source for a Firestorm barrier. The structure gathers energy over time then releases it into Firestorm wall sections to emit a defensive barrier. If the process is stopped before the generator is drained it can be immediately started again, but the duration will be shortened if the machine has not had time to fully recharge. If the generator is drained completely it will be disabled until it fully recharges. GDI developed the generator and was used during the Second Tiberium War.

﻿GDI used the Firestorm Generator to power up the accompanying barrier for a limited time. The generator was used in some of GDI's most important strongholds, specifically their base in Hammerfest. During the Second Tiberium War though, Nod somehow managed to compromise the Firestorm defenses and overrun Hammerfest. A squad of Hover MLRSs escorting engineers was able to enter Hammerfest by water and recaptured the base by disabling the Firestorm Generator. The generator would later serve to be an important asset for GDI against Nod's chemical and cluster missiles late in the war.

In the alternate Nod campaign, Nod prepared to assault Hammerfest and bring Kane's vision to reality. Slavik persuaded GDI commander Jake McNeil to infiltrate the area and disable the Firestorm Generator, allowing his Nod "pursuers" to cross the Firestorm barriers without harm.

As the Firestorm Crisis wore on, CABAL somehow managed to construct his own Firestorm Generator. This generator however allowed CABAL's Firestorm barriers to become online for an unlimited time, rendering any attacks against CABAL's core impregnable. Fortunately a combined GDI-Nod assault destroyed all of CABAL's power plants and rendered CABAL's generator offline.

﻿Ultimately, as Tiberium consumed much of the planet, GDI discontinued the use of the Firestorm Generator in its arsenal to reallocate resources to the eradication of Tiberium. The Firestorm barrier, however, was used to protect the Tacitus at the Rocky Mountains complex, a reason deemed highly important for the huge costs just to maintain this barrier.

The structure is similar in appearance to the Iron Curtain, suggesting a possible relationship between the technologies. 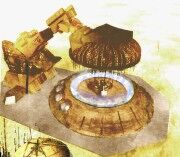 in snow theater
Add an image to this gallery
Retrieved from "https://cnc.fandom.com/wiki/Firestorm_generator?oldid=226913"
Community content is available under CC-BY-SA unless otherwise noted.