Fortress Walls (simply called Wall in the game) are the passive defence system for all three sides of the Third World War and Psychic Dominator Disaster.

The Fortress Walls used by the Allies and the Soviets during Third World War were the successors of the Second World War Concrete wall. During the Psychic Dominator Disaster, the Soviet traitor Yuri also used these walls in his arsenal (known as Citadel Wall). For all intents and purposes, Yuri's walls were similar to the Allied and Soviet one, except height and shape, and that if they are damaged, they need to be sold and be rebuilt instead of simply being rebuilt, as the Allies and Soviets did.

Walls are basic obstacle for keeping out enemy infantry and vehicles. They are cheap and fast to build, and are the first lines of defence against the enemy's advance. They are often placed around key structures, such as Construction Yards, to keep out infiltrators and engineers. They are also often placed in front of certain base defences to draw fire, as building new wall sections destroyed in an enemy attack is often cheaper than repairing or building new base defences. Note that some base defences may not fire over walls.

Wall sections could not be breached by small arms fire, but are vulnerable to explosive and tank shells. Some of the largest armored units such as the Battle Fortress, and later Apocalypse Tanks can crush walls (in the case of the Apocalypse, just about anything) with impunity.

The main purpose of Walls is to hinder attacking ground (i.e. non-flying) Troops, allowing defenses to damage and kill attackers as they attempt to breach the Walls. Once breaches occur, the attacking enemy have free rein to destroy the defenses and other buildings within the Walls. Therefore when designing a defense, it is crucial that players do not to attempt to envelop their entire village within one big Wall. Instead, it is recommended that players design their Walls in layers or cells so that ground troops have to break through multiple Walls to attack the entirety of the base, while also providing the defenses more opportunity to repel the attack. Note that with this strategy there will inevitably be buildings that cannot be placed within the Walls; that is entirely normal and can even be used to your advantage by placing non-defensive and non-resource buildings such as Power plants, Radar towers, and Battle labs immediately outside the Walls to act as another layer for enemy units and tanks to fight through.

Walls block all ground units with the exception of Battle Fortresses. The use of Yuri's Magnetrons allows ground units to bypass walls by levitating them.

Walls will also be ignored by attacks of Prism tanks and Tesla tanks (as well as Prism Towers and Tesla Coils).

If there are 2 layers of Walls, the blast radius from area splash damage like from (e.g. Airplane crashes, Grand Cannon's explosive shells) will affect both layers.

Walls will not be targeted by air units, but they can be destroyed by them through indirect means (e.g. Kirov Airships bombing enemy tanks that are near Walls, or a shot down aircraft hits the ground near Walls). 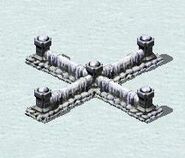 Retrieved from "https://cnc.fandom.com/wiki/Fortress_Walls_(Red_Alert_2)?oldid=237596"
Community content is available under CC-BY-SA unless otherwise noted.