Can self-repair when damaged. Neutron Scrambler explosions can affect aircraft.

The Future Tank X-1 is a humanoid-esque, computer-operated vehicle available to the Allies in Red Alert 3: Uprising. One of the most powerful and expensive units in the game, a single Future Tank is more than capable of going toe-to-toe with large groups of enemies, if not destroying or crippling entire columns of vehicles and infantry.

Developed by the FutureTech Corporation after the victory of the Allied Nations over both the Soviet Union and the Empire of the Rising Sun, Future Tank X-1 was designed to be the final say in ground warfare. Capitalizing on design elements found within Russian and Japanese military hardware, the Future Tank eschews the design aesthetic of traditional Allied tanks in favor of a tracked, humanoid form, controlled by an advanced A.I. and covered in heavy armor plating. Although numerous objections were raised to the apparent unethical nature of the vehicle due to its on-board artificial intelligence, FutureTech's PR department successfully waylaid these concerns by appealing on the grounds of saving lives by phasing out human combatants in favor of robotics. Further safety precautions included the incorporation of ethics programming related to battlefield logistics and a set of command override codes granted to field officers deploying the tank just to thwart any potential loss of control.

The Future Tanks, under the command of Rupert Thornley, appeared during the Soviet Underground's attack on Sigma Island, defending the Sigma Harmonizer. All of them were destroyed, along with all of the Future Tank production facilities on the island.

Developed exclusively to provide an armored counter-part to both the Soviet Union's Apocalypse Tank and the Empire's King Oni mech, the X-1 was easily the most durable of all the Allied units - though also the slowest. Its hull plating could easily absorb damage from even the Apocalypse Tanks' twin Drakon cannons and, over time, any Future Tank's self-diagnostic systems would initiate an automatic repair.

The vehicle's standard armament lacked a direct approach; outfitted with a pair of arm-mounted 'Neutron Scramblers,' Future Tanks could fire concentrated bursts of explosive energy at a target which would detonate and expand outward in a wide radius, dealing significant damage to any enemy unit within the sphere of effect. Utilized in groups, successive blasts from this weapon had the ability to obliterate entire divisions of enemy forces in mere seconds.

When the Scrambler couldn't provide needed expediency, the weapon's own heat sinks could be directed to unleash a powerful beam of concentrated energy capable of destroying any unit (or group of units) caught in its path in a single shot. Indeed, only the most durable of structures - a Construction Yard or Super Weapon - stood any chance of surviving its "Riot Beam".

The Future Tank X-1 is a heavily armoured, slow, and extremely powerful tank. It is also the most expensive Allied unit next to the Habringer Gunship, costing 3000 credits and requiring both Max Clearance and a Defense bureau to be constructed.

Its burst damage is greater than both the King Oni and the Apocalypse Tank. Combined with the huge AOE damage done by the neutron scramblers, the Future Tank can win engagements even greatly outnumbered. Also, its Riot Beam ability allows it to quickly incinerate any enemy units or structures in its path.

However, the Future Tank is far from invincible. Even though its neutron scramblers' blast radius can damage enemy aircraft, it will not target aircraft on its own. Despite being AI-controlled, is still vulnerable to Natasha's Pilot Snipe ability. Also, its rather slow speed means that it can easily be swarmed by anti-armor infantry. So it is recommended to escort it with anti-air and anti-infantry units, as losing even a single Future Tank is very costly.

The Chronosphere synergizes well with the Future Tank, since their dimensions are so slim, a surprising amount can fit inside the radius. Coupled with scouting units or the Surveillance Sweep protocol, a group of five or more Future Tanks can be Chronoshifted into an enemy base and completely cripple their production ability with Riot Beams, basically winning the game. However, doing so requires a tremendous amount of funds, and is very difficult without a solid economy.

Battlefield reconnaissance has revealed at least these facts about Future Tank X-1:

• Riot beam -- The Collider fuel cell powering the Future Tank generates excess heat and energy, which is stored in special reservoirs that power the neutron scramblers. By emptying these reservoirs through a focused array, the Future Tank can launch a devastating and concentrated attack with far more power than any conventional round.

• Tough as nails -- The Future Tank is even sturdier than the Allied assault destroyer. It can withstand direct assault from virtually any known weapon and emerge relatively unscathed. Its processing systems and weapons are especially resistant to damage. It would take an overwhelming force to destroy a single FutureTank.

• Premium value -- As the Future Tank is still in a prototype stage, it is very expensive, and only a handful of these units exist in the entire world. Only FutureTech's own Harbinger Gunship carries anywhere near the same price tag. FutureTech will have to find ways of cutting costs if it hopes to see the FutureTank replace modern tanks on the battlefield.

Upon exiting an Armor Facility 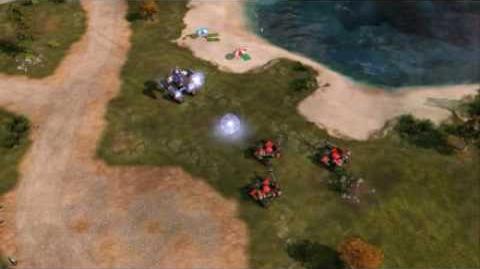 Retrieved from "https://cnc.fandom.com/wiki/Future_Tank_X-1?oldid=231304"
Community content is available under CC-BY-SA unless otherwise noted.