The commando was GDI's ultimate infantry unit in Tiberium Wars and Kane's Wrath.

Backed by 50 years of tradition, they are the results of a powerful training program, with a 22% fatality rate and a 97% drop-out rate for the survivors (even after starting with the very best of the best in all branches of service).[2] Typically, only one commando at a time will be allotted to a commander due to the high expense of equipping one, and in addition to the scarcity of such elite graduates.

They are also equipped with prototype high rate-of-fire assault railgun carbines which can tear infantry apart and, if given enough time, light vehicles like the Attack Bike. And, like their predecessors, they carry a large amount of det packs (based on an exotic new explosive) for demolition of buildings. One of their key abilities is destroying enemy Mechanized walkers by planting explosives on their legs.

To maintain fitness, GDI commandoes usually do one handed push ups when idle, which is a testament to their physical prowess.[4]

Lt. Fullerton, the commander of Stuttgart GDI forces was a Commando and was instrumental in retaking the city from the Scrin. Higgins and Conrad are commandos used extensively in GDI recruitment videos and posters.[5]

GDI commandos are some of the deadliest infantry on the field of battle, and should never be ignored by either their commander or opposing commanders.

Commandos have superior range to most other infantry, and, much like snipers, can eliminate an infantry soldier in a single hit. However, they fire extremely quickly and as a result can destroy many squads of enemy infantry all on their own. They are perhaps the best counter available to masses of enemy infantry.

Commandos can lay det packs on enemy walkers or vehicles provided that they get right in front of them. Since there are no walker units that are particularly deadly to infantry, they can easily tear straight through walker groups. If a commando penetrates an enemy's defenses they are equally deadly, capable of destroying many buildings or an entire base. GDI Commandos have jump jets, allowing them to jump over otherwise impassable terrain and anti-surface defenses, meaning they are especially good at getting into the weak spots of an opponent's base.

They are more difficult to kill than most infantry, though they are still very vulnerable to massed anti-infantry fire. Unlike most infantry, however, they can hope to take some fire from things like anti-infantry base defense turrets and survive the encounter, though charging or staying within range of said turrets is still not advisable. Commandos can even take small amounts of flamethrower fire and survive, as long as they retreat or jump jet away quickly.

However powerful they may be, they still have glaring weaknesses. Commandos are horribly ineffective against vehicles. With very excessive fire they can kill light vehicles, but engaging light vehicles isn't even advisable most of the time against a good enemy commander. Firing at heavy vehicles like tanks is pointless; commandos cannot hope to noticeably damage them in any reasonable period of time, being even less effective than standard assault rifle-wielding infantry at the task. Units such as Hammerheads or Venoms can make quick work of commandos and intercept them quickly as well; commandos have no ability to defend themselves from aircraft and are fragile. Additionally, only one commando may be on the field at a time. Traditionally, Nod commanders tend to use Shadow Teams to counter commandos and GDI commanders may make use of Sniper teams. Both are stealthed units that can quickly kill a commando. If they get the first hit in, they are virtually guaranteed to emerge victorious. Buzzers can instantly kill commandos too, but they must get right in front of a commando to make this possible and commandos can kill them in a single shot. Scrin commanders may make use of the Buzzer Swarm power to summon Buzzers directly on top of a commando to negate this disadvantage, or attach Buzzers to a vehicle then move it right next to a commando.

Originally, the commando was supposed to have two versions - one for the Blue Zones, featuring short sleeves and an eyepiece and a Red Zone versions, with full body adaptable armour. However, eventually, the original rifleman model was used for the Commando, the riflemen were given a new one and the Blue Zone commando was recycled as the sergeant, guarding the barracks. 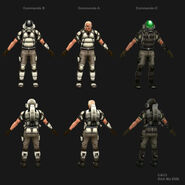 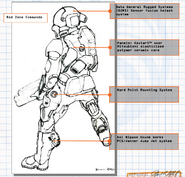 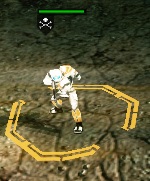 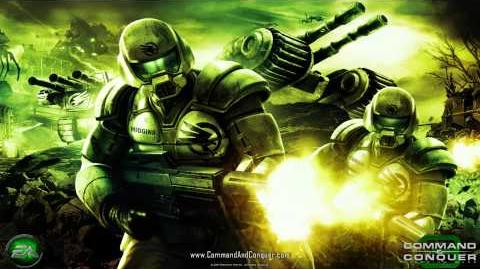 •Rarely the commando may dance until interrupted.

•More commonly he'll dance for only a few seconds.

•He'll do a spin trick with his gun.

Retrieved from "https://cnc.fandom.com/wiki/GDI_Commando_(Tiberium_Wars)?oldid=230457"
Community content is available under CC-BY-SA unless otherwise noted.