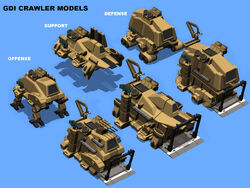 The successor of the traditional MCV, the large, slow moving box that is the Defense Crawler is the slowest of the crawlers, but also the one with the highest health and upgrades. It is also the only GDI crawler that constructs buildings, such as the Missile turret, Focus beam and Ion Cannon. While defenseless in the beginning of the match, the crawler gains 2 small short range artillery batteries on top when upgraded to tier 2, and an additional 2 when upgraded to tier 3. These weapons are powerful when multiple compact groups of units are attacking you, or when assaulting Reinforced structures. It has no anti-air capability, though the Missile Turrets the GDI Defense Crawler can deploy can network together, which the Nod Defense Crawler's Missile turrets cannot, meaning that if building 3 or 4 of them, they are quite powerful, even early in the game. Keep in mind that the GDI Bunker is also superior to the Nod Bunker by most accounts, having both an additional slot for garrisoning, and a rather powerful Machine Gun when upgraded. Note that only deployed Defense Crawlers can use their built-in weaponry.

Overall, the Defense Crawler is only useful when the player is at least level 10 (or at the very least Level 4, at which point both Guardian Cannons and Missile Turrets are unlocked), as the first units are impossible to use in a successful strategy. The crawler can be used very well in holding ground, such as near a TCN Node, capable of keeping enemy units suppressed for a very long time. When upgraded with Defensive matrix, the crawler gains a shield when deployed, or the Mobility matrix, which gives a shield when packed up. Each hold 1000 extra health, and protect anyone inside the radius. When in tier 3, the shield can be upgraded to hold 2000 health, using the Enhanced shields upgrade. combined with Enhanced repairs, which give the crawler double repair speed and increased repair radius, it can be a formidable enemy, especially when units are being churned out and turrets are deployed.

The crawler is also offer the largest array of GDI infantry, although commando is slated to the offensive crawler. The infantry offer more diverse fire power and cheaper cost, but with less durability. This fact coupled with medical support option make Defence Crawler a premium option for urban terrain (where many garrisonable building is available).