The GDI combat uniform is an armour used by GDI in Tiberian Sun.

The uniform consists of a standard GDI combat uniform (either type 1 or 2), a ballistic vest enclosing the entire torso, locked on the sides, usually used with additional armoured panels on the front, a life support unit on the back, armoured plates worn on the legs and a helmet. The helmet has a large, transparent faceplate, with an integrated air scrubber/filtration module, communications equipment, a heads up display, a flashlight and retractable antennae on its right side.

The design is highly modular, allowing for easy customization, which includes a special medic helmet connected to the field medical pack, a disc thrower backpack (essentially a grenade dispenser) and a jump jet with an integrated cannon for jump jet infantry. Engineer corps also had their own modifications, with backpacks containing all the necessary tools they needed. 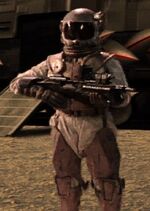 A suit without additional armoured panels on the front

A soldier wearing the armour without the front armour panels 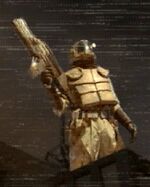 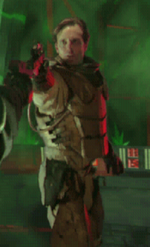 Side shot of the uniform, the armoured vest's straps are clearly visible

Back of the helmet 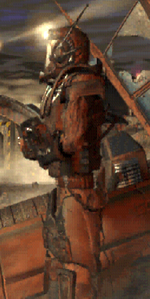 Retrieved from "https://cnc.fandom.com/wiki/GDI_combat_uniform_(Tiberian_Sun)?oldid=128537"
Community content is available under CC-BY-SA unless otherwise noted.