The second-generation power plant was the basic GDI power-generating structure during the Second Tiberium War and the Firestorm Crisis. It came with one turbine by default, with two slots for additional turbines.

This power plant is a highly compact gas turbine generator which features a single large cooling tower used to vent excess heat from the interior. This tower doubles as the power transmission center.

The generator is durable and efficient enough to produce twice its standard undamaged output of 100 power units without substantial modification. The only requirement is building additional turbines which are readily installed on the base structure. The plant can support up to three turbines, but is constructed with only one by default. When a sufficient tech level is reached, the turbines can be constructed at the low cost of 100 credits, allowing the player to produce 200 power per plant when fully upgraded for the total cost of 500 credits (300 for the initial plant, 100 for each of the turbines).

The advantage of this structure over Nod's two power plants is twofold. First, one only needs to construct a single building, which is especially useful when in difficult terrain or in concert with Pavement requirement. Secondly, the upgrade is far more cost effective than building a Nod advanced power plant, making them a tempting target for capture by the player, where a basic Nod power plant or a GDI power plant that has not been upgraded is typically a waste of a 500 credit engineer to capture a 300 credit structure. 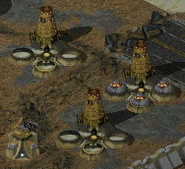 Beta appearance. Power plants started with no turbines at the start, and the first one was to be placed in the uniquely indicated central slot instead of the right-most one. 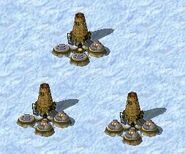 in snow theater
Add an image to this gallery
Retrieved from "https://cnc.fandom.com/wiki/GDI_power_plant_(Tiberian_Sun)?oldid=226868"
Community content is available under CC-BY-SA unless otherwise noted.