Fires the Ion Cannon (effectively an instant-kill on anything affected)

The GS-2 Godsend was a man-portable GDI ion cannon targeting beacon of the First Tiberium War and was used by troops to request an ion cannon strike at its deployed location. The beacon automatically transmitted authentication and targeting data. The latter allowed the ion cannon to deliver a strike directly on the beacon.

A strike could be averted by disabling the beacon. This was most reliably done by physically accessing the GS-2 rather than attempting to jam or modify the signal. Engineers and technicians were trained to disable beacons.

The GS-2 appears in Command & Conquer: Renegade. When issued in single player it is mainly a novelty weapon as buildings may be easily disabled by their master control terminals. In multi-player they may win the game by being placed on the beacon pedestal and waiting for the 30 second countdown to complete. As the defending team will attempt to disable the beacon it must be defended by the attacker. 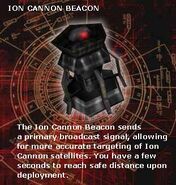 Icon with no text
Add an image to this gallery

Retrieved from "https://cnc.fandom.com/wiki/GS-2_beacon?oldid=177218"
Community content is available under CC-BY-SA unless otherwise noted.