The gate is a simple automated barrier that opens up for allied units, while obstructing passage for civilians and enemy forces. Armoured gates were introduced by both Nod and GDI in the Second Tiberium War, and also used during the Firestorm Crisis. Gates proved to be a nuisance for small raider parties intent on destroying vulnerable structures such as Power plants, as they could not penetrate the armour well enough. However, this armour was no match for medium and large-sized armies, and they would quickly crumble under continuous barrages of enemy fire.

Gates could still be seen during the Third Tiberium War protecting key GDI facilities, such as the Port Authority Building at the Hampton Roads Shipyard in Virginia, USA. 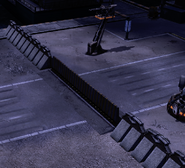 Nod Gates in Snow Theater
Add an image to this gallery
Retrieved from "https://cnc.fandom.com/wiki/Gate?oldid=237524"
Community content is available under CC-BY-SA unless otherwise noted.