The gattling(sic) cannon is a base defense used by Yuri in Yuri's Revenge.

The name comes from the term "gatling gun": the cannons are armed with a pair of these lethal weapons. Firing a high-caliber slug with a tremendous muzzle velocity, the cannons can target both ground vehicles and aircraft.

Deployed at various Yuri bases worldwide, these structures are staples of Yuri's defensive networks. Notably, they made up the defense of the Psychic Dominator on Alcatraz Island when the Allies attempted a last-ditch effort to prevent the superweapon from being activated.

The cannons take a while to "spin up"; in other words, it takes some time for the cannons to reach their maximum rate of fire and, therefore, their maximum damage potential. This means that while the cannon is adequate to deal with light infantry and aircraft initially, it has to survive a prolonged period of sustained firing to be able to damage vehicles.

They are unbelievably powerful against pretty much all lightly armored targets - nothing could withstand the storm of lead these cannons rained down upon them under prolonged fire. Only heavy vehicles stood a chance, as their armor could shrug off the bullets - at least for a while.

The Gattling Cannons are powerful and versatile, but pose several drawbacks. First, the range is fairly short. More importantly, however, the cannons lack the ability to penetrate armor early on - before its cannons speed up, they are essentially sentry guns with the armor of flak cannons. Thus, a tank rush will deal with the cannons before they could pose a serious threat to them.

Enemy mind control-resistant units like War miners can also distract Gatling Cannons, which prevents the Gatling Cannons from destroying aircraft and infantry units. If the Gatling Cannons are distracted by heavy armour, such as a tank rush, then Tanya or SEALs can plant C4 charges to instantly destroy it without being fired upon.

- Most versatile of all defenses.

- Can attack anything (Ground, Air and Sea) in range.

- Powerful against Infantry and quickly guns down aircraft

- Strong against even  Kirov Airships when built in numbers.

- Does appreciable damage to light armor, especially when guns spin up to deal more damage

- Relatively expensive for a basic ground defense building, costing double of a pillbox and a sentry gun.

- Also requires sufficient power to operate and to stay online.

- Does little damage to heavy armor. 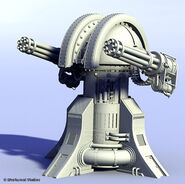 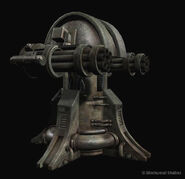 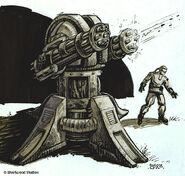 A line of Gattling Cannons defending a base in San Francisco.

Closeup picture of a Gattling Cannons defending the base in San Francisco.

Retrieved from "https://cnc.fandom.com/wiki/Gattling_cannon_(Yuri%27s_Revenge)?oldid=242593"
Community content is available under CC-BY-SA unless otherwise noted.